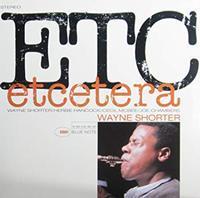 This is an interesting RVG Blue Note recording in that it's relatively dry compared to most and more importantly the piano is remarkably well-recorded compared to some of RVG's "swampier" sounding keyboards. Also Joe Chambers' drum kit seems more closely miked than usual and because of the dryness has an appealingly direct and dynamic quality. - Sound 9/10 Music 9/10 Michael Fremer Analogplanet

The original LP sounded bleached and was lacking in dynamics.  Kevin Gray has unearthed what ranks among the best-sounding Blue Notes of the 1960s. No fake stereo soundstaging here. The musicians are spread out in a convincing space, and the balance among the players is near ideal. Tonally, the LP is leaps and bounds ahead of the original, and unlike some Blue Note sessions, the piano is well recorded. - The Audio Beat

This quartet session from 1965, has long been considered one of Wayne’s finest studio albums, even though it remained unreleased until 1980. Etcetera features all Shorter compositions, with the exception of Gil Evan’s passionate Barracudas. Wayne's Indian Song takes its place as one of Shorter’s most intensely hypnotizing compositions. Etcetera is one of the true highlights of the Shorter discography.