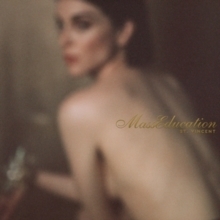 A year on (to the week) from the release of the critically acclaimed Masseduction album, St. Vincent releases reimagined piano versions of the album. Performed with Thomas Bartlett over two days in a studio in Midtown Manhattan, August 2017.

A stunning standalone work in its own right, MassEducation is in fact another dimension of last year's universally acclaimed MASSEDUCTION. Recorded live in the studio over two nights in August 2017 while at Electric Lady mixing MASSEDUCTION, MassEducation lays bare the exquisite songcraft of its other half. Performed entirely by Annie Clark (aka St. Vincent) on vocals and Thomas Bartlett on piano, the new album renders songs like "Young Lover" and "Fear The Future" and their subjects in vivid, vulnerable new light.

"We neither rehearsed nor spoke about how to approach any song, but rather, played two to three live takes, picked the best one, and trusted in the feeling of the moment," Clark said about the new record in a handwritten letter. "So here it is—two dear friends playing songs together with the kind of secret understanding one can only get through endless nights in New York City. Enjoy."