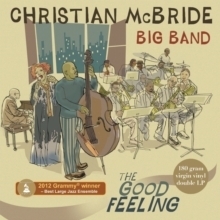 The good feeling you are about to feel is the kind that can only be derived by the collective efforts of players at the peak of their powers assembled and led by the one and only - Christian McBride! The bassist with the mostest hosts an aggregation of players including his own band mate Steve Wilson, multi-reedman Ron Blake, trumpeter Nicholas Payton and his close personal friend, vocalist Melissa Walker. McBride arranges and conducts the project, which has been a life-long dream of his. They don't call it brass for nothing.

"The Good Feeling marks the debut of the Christian McBride Big Band, but the seeds for this album were sown in the mid-'90s. Jazz at Lincoln Center commissioned McBride to write and arrange his first major big band work—"Bluesin' In Alphabet City"—in 1995, and that experience really sparked his interest in composing for large groups. Now, sixteen years after the ink dried on that number, it appears in the penultimate position on his first big band recording.

"Over the course of eleven tracks, McBride manages to present music that's respectful of big band traditions, while also showcasing his own unique compositional voice. On one piece, the band might be playing over a pedal-to-the-metal swing pulse, with a string of strong soloists selling their wares over feisty backgrounds that come and go ("In A Hurry"), while another number might sound like a cross between "Maiden Voyage" and funky Freddie Hubbard-style fare ("Brother Mister"), as distilled through the mind of one of jazz's most talented, high profile bassists.

"The instrumentalists rule the roost on this album, but McBride makes room for vocalist Melissa Walker on a few numbers, and she brings class to the proceedings. Walker's first feature, "When I Fall In Love," opens with McBride's elegant arco work, and contains some charming piano soloing from Xavier Davis, while the band cooks behind her vocals on the waltzing "A Taste Of Honey." "The More I See You" opens in a relatively calm state, with Walker singing the verse, but things really heat up later, when a Sonny Payne-style triplet build-up from drummer Ulysses Owens, Jr. leads to some shouting brass.

"While the vocal standards tend to showcase McBride's more conservative, in-the-tradition arrangements, his own "Science Fiction" shows what he can do when he moves away from the norm. This number proves to be an episodic odyssey full of wonder and surprise. Suspense gives way to sounds of the bold and big variety, and Davis and McBride set things in motion with driving, hook-laden riffs. Seismic shifts take place in certain places, while more subtle adjustments are at play throughout the piece. McBride utilizes flutes and bass clarinet in expert fashion, and these instruments help to broaden the overall sound of the band.

"Featuring McBride at the top of his game, The Good Feeling, like its creator, is steeped in tradition while remaining tapped into what's current and exciting in jazz today." - Dan Bilawsky, allaboutjazz.com, September 18, 2011

Since 1989 when bassist Christian McBride moved to New York at the age of 17, the Philadelphia native has been one of the most important and influential artists of his generation. He's not only developed into a top-tier solo artist who is equally adept on acoustic and electric bass, but he's also been the go-to bass sideman, with support duties ranging from Herbie Hancock and Chick Corea to Diana Krall and Sting. Over a period of 20 years, McBride has been documented on over 250 recordings.