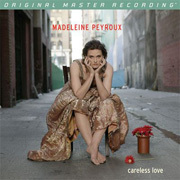 Madeleine Peyroux's sophomore release, Careless Love, comes eight years after her debut which she recorded at the tender age of 22.

Having been born in Georgia, then moving to France early on, it's no wonder her range of musical taste and talent would be diverse. With her sultry alto voice, she has recorded music here from such artists as Bob Dylan, Hank Williams, Leonard Cohen and W.C. Handy.

Don't Wait Too Long is an original by Peyroux and was co-written with Jesse Harris and Norah Jones.

Madeleine Peyroux is the best kind of one-trick pony: she sounds uncannily like Billie Holiday, a marvelous feat if you can pull it off. On Careless Love—the long-awaited follow-up to her 1996 debut, Dreamland—she brings her wide-reaching sensibilities and dazzling Lady Day voice to a dozen old and new songs.
Careless Love is more eclectic and less overtly jazz-focused than her debut, featuring classic songs from W.C. Handy and Hank Williams, in addition to more contemporary fare from Leonard Cohen, Bob Dylan and Elliott Smith. It’s all a bit too studied and imitative to be considered blues-and-jazz singing of the first rank. But it’s close. Her mastery of Holiday’s languorous phrasing is impressive, delivered in a voice at once sultry and soulful. If she can learn to trust her instincts, it’s certain this lady’s day will come, no further comparisons required.

Madeleine Peyroux's first release in eight years is a moody, haunting masterpiece that will soon be playing in every coffee house and cozy bar in the country. It's a whale of a record. Peyroux's voice is amazing—grainy, intimate and unaffected, with a bluesy lilt that at times recalls mid-career Billie Holiday. In fact, her singing recalls not just Holiday but the generation of singers who came up in the 1930s—people like Lee Wiley, Connie Boswell, Maxine Sullivan and Cliff Edwards—who sang with an unembellished directness and intense sincerity.

These are the kind of songs that make the hairs stand up on the back of your neck.she has  that kind of voice—that people will be listening to Madeleine Peyroux long after we're all gone.

1. Dance Me to the End of Love

4. You're Gonna Make Me Lonesome When You Go 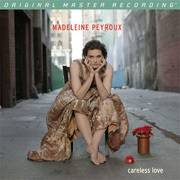