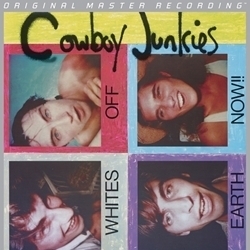 Mastered by Shawn R. Britton from the Original Master Tape

Upon its release in 1986, the Cowboy Junkies’ riveting debut sounded like nothing else at the time. Gloriously, it still doesn’t. Haunting, harrowing, eerie, and gorgeous, the soft-toned album reinterprets eight classic blues in a ghostly manner that combines Delta traditions, European classical minimalism, roots country, and thoroughly understated ambience.

The album’s spare, hyper-realistic approach stood as a proud contrast (and still does) to the overly polished, studio-slick blues, pop, and rock efforts mainlined out of high-tech studios. Recorded in just seven hours with an ambisonic microphone, Whites Off Earth Now!! is one of the most acoustically resplendent and dynamically rich records ever cut. The Canadian band’s intentional attempt to reclaim purity has made WOEN a cult classic and audiophile favorite.

Comprised of three siblings and a bassist friend, Cowboy Junkies stuck to songs that they had been playing live since 1985 when it came time to solidify their existence with an actual album. They favored potent standards such as Robert Johnson’s “Me and the Devil Blues” and “Crossroads,” John Lee Hooker’s “Decoration Day” and “Forgive Me,” Bruce Springsteen’s “State Trooper,” and Big Joe Williams’ “Baby Please Don’t Go.” In the Junkies’ hands, these tunes take on newfound ethereal power and riveting danger. Sung in a hushed lullaby voice by singer Margo Timmins, lyrical meanings change and emotional chills increase. Subtle illusions of calmness hold steady, but droning guitars and short bursts of bruised feedback generate a tension that drives these songs into our subconscious.

Disgusted with what they rightly perceived as the contrived, overly processed sound of 80s recordings, the group agreed to let producer/engineer Peter Moore experiment with an unconventional recording technique. The decision proved a stroke of genius. Set up in an uncomfortably hot garage padded with carpets and materials to dampen echoes, the foursome gathered around a single Caltrec Ambisonic Microphone—the quartet recorded direct-to-two-track. The results are magical, the natural and unimpeded sound that audiophiles dream about.

Mastered from the original tapes by Mobile Fidelity, this numbered limited-edition 180-gram LP captures every last finite detail and note. Microdynamics and sonic cues abound. The sticking together of Timmins’ lips from the heat and sweat right before she begins to sing on both Johnson tunes; the sound of drummer Pete Timmins putting his sticks down at the end of “I’ll Never Get Out of These Blues Alive”; myriad creaks, shuffles, and vibrations.

What was a stunning headphone record is now an unreal stereo experience. This is what in-the-room presence is all about; albums don’t get more realistic-sounding.

The sense of space is staggering. 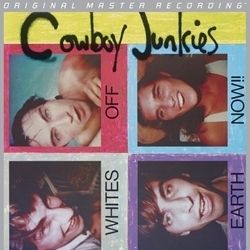