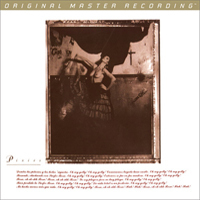 You owe it to yourself to possess at least one 'rock' recording that many (unfortunately) tend to qualify as lo-fi when in reality this is more hi-fi than 99% of what's out there or ever was Sound 4.5/5 Enjoy the music review

The Plymouth Rock on which alternative rock was founded, the Pixies’ Surfer Rosa forever altered the music environment—even if it did take most of the world a few years to catch up with its brilliance. Internationally acknowledged as a pioneering record, its rollercoaster blend of harsh and soft tempos, male and female singing, intense punk and bubblegum pop tones, dark and light quips, and off-kilter sensibilities is the influential equivalent of the Velvet Underground’s oft-cited 1968 debut.

Remastered by Mobile Fidelity Sound Lab from recently discovered, first-generation analog original master tapes, this groundbreaking record now sounds as if you were experiencing it for the first time. Vivid, immediate, massive, and detailed, this is how Surfer Rosa was meant to be heard when Albini completed it and turned it into the label.

“The heaviness and hugeness of the room-reverberating drumbeat that begins the album-opening “Bone Machine” epitomizes the record’s forward impact, visceral punch, grinding crunch, and dynamic headroom. Rather than cluttering the mix with an avalanche of effects, Albini left space without sacrificing live detail or volatile oomph, shown to great effect on “Broken Face,” “Gigantic (there’s a piano—who knew?), and haunting “Where Is My Mind?,” which opens unto a sonic canyon that swallows the listener whole.” - Bob Gendron, The Absolute Sound "Smack in between hardcore punk and alternative, it was impossible to deconstruct the Pixies' ferocious howl. Their secret weapon was leaping from sweet to screamin' (which Kurt Cobain admitted to boosting): On "Gigantic," Kim Deal sings like Peppermint Patty as the band drives a spike into Eighties rock." -.rollingstone

Summing up, this first Pixie reissue by Mobile Fidelity makes a convincing argument that when using the Original Master Tape, recorded by an original 'master' engineer the likes of Steve Albini or studio partner - and Shellac bassist - Bob Weston, that MoFi's half-speed mastering/cutting method even at 33 1/3 rpm gives a run for the money to competing 45 rpm releases cut in real time. You owe it to yourself to possess at least one 'rock' recording that many (unfortunately) tend to qualify as lo-fi when in reality this is more hi-fi than 99% of what's out there or ever was Sound 4.5/5 Enjoy the music review

Mastered from the Original Master Tapes • Pressed at RTI 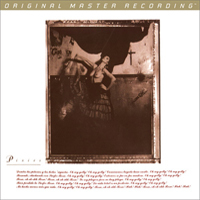