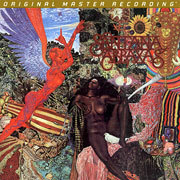 Picking up on the momentum of the band’s excellent 1969 self-titled debut and drifting into harder-edged, more versatile territory, Abraxas is the confident sound of Santana stretching out and carving its own Latin rock subgenre. The 1970 set is nothing short of legendary.

A confluence of celebratory vibes, bluesy jams, mellow vocals, and hip-shaking grooves, it is a cornerstone of any music collection. Now, for the first time, you can listen to Abraxas the way it was meant to be experienced, with the instruments and musicians placed in the proper channels.

In addition to correcting the imaging, Mobile Fidelity’s collectable version captures the stunning tonal range of Santana’s guitar as well as the nuances of his distinctive touch. Every imaginable detail is brought to the forefront.

"Mobile Fidelity has done an excellent job with its remastered vinyl editions. Abraxas is a very fine-sounding record, with terrific air, rich textures, a fine mix, and spacious soundscape. MoFi's version is palpably warmer, airier, and more dynamic than (the) old Columbia pressing, which sounds a bit wiry." - Wayne Garcia, The Absolute Sound,

"Black Magic Woman," the Top Five hit from Abraxas, is definitive Santana: Afro-Latin grooves and piercing lyrical psychedelic blues guitar. It was a cover of a Fleetwood Mac song written by one of Carlos Santana's guitar heroes, Peter Green. The album's other hit was also a cover: Tito Puente's "Oye Como Va." - rollingstone 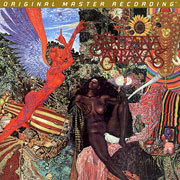