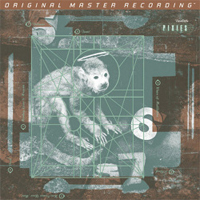 Pure Analogue Mastered  from the Original Master Tape at MFSL

Even two decades after its initial release, the Pixies’ sophomore album remains a staggering achievement, toning down the group’s arty weirdness just enough for its natural pop sensibilities to shine. And shine they do on this exceptional Mobile Fidelity reissue, remastered at half-speed from the original stereo mastertapes and lovingly pressed onto 180-gram vinyl. - The Absolute Sound

The Pixies’ 1989 sophomore release remains among the best and most important albums ever made. Q magazine declared the rock landmark as one of the 100 Greatest Albums Ever. Nirvana’s Kurt Cobain cited it as a primary influence. Rolling Stone placed Doolittle high on its prestigious 500 Greatest Albums of All Time list. Chock full with violent surrealism, religious symbolism, and a head-spinning range of material that encompasses atomic pop, theatrical country and western, abrasive post-punk, and giddy surf rock, the record is a synthesis of contagious tunefulness and linguistic wit.

Mobile Fidelity is proud to honor this distinguished effort with a sonic treatment that presentsDoolittle as it was always meant to be heard:

On 180-gram vinyl that allows every nuance to shine.

Sonics 
Even two decades after its initial release, the Pixies’ sophomore album remains a staggering achievement, toning down the group’s arty weirdness just enough for its natural pop sensibilities to shine. And shine they do on this exceptional Mobile Fidelity reissue, remastered at half-speed from the original stereo mastertapes and lovingly pressed onto 180-gram vinyl.
Sonically, the album improves upon even the MoFi SACD—the previous standard in Pixies audio—offering greater depth, more tonal punch, and an impressively forceful low end (dig those booming drums on “La La Love You”). Frontman Black Francis’ frayed-nerves vocals are captured with stunning clarity throughout, particularly on the angular, punkish “Debaser,” where he screams, sighs, and spasms before losing himself completely in manic fits of laughter. “Tame” sets up the soft-loud template that Kurt Cobain would later adopt with Nirvana, beginning with Black’s urgent whisper (“Hips like Cinderella”) before exploding into bloodcurdling shrieks and white-hot guitar shrapnel once the chorus hits. Elsewhere, the group dabbles in fractured surf rock, art-punk, loose-limbed garage, and bastardized doo-wop—wildly disparate textures that are all presented here with analog warmth and clarity. TAS The Absolute Sound
After 1988's brilliant but abrasive Surfer Rosa, the Pixies' sound couldn't get much more extreme. Their Elektra debut, Doolittle, reins in the noise in favor of pop songcraft and accessibility. Producer Gil Norton's sonic sheen adds some polish, but Black Francis' tighter songwriting focuses the group's attack. Doolittle's most ferocious moments, like "Dead," a visceral retelling of David and Bathsheba's affair -- are more stylized than the group's past outbursts. Meanwhile, their poppy side surfaces on the irresistible single "Here Comes Your Man" and the sweetly surreal love song "La La Love You." The Pixies' arty, noisy weirdness mix with just enough hooks to produce gleefully demented singles like "Debaser," -- inspired by Bunuel's classic surrealist short Un Chien Andalou -- and "Wave of Mutilation," their surfy ode to driving a car into the sea. Though Doolittle's sound is cleaner and smoother than the Pixies' earlier albums, there are still plenty of weird, abrasive vignettes: the blankly psychotic "There Goes My Gun," "Crackity Jones," a song about a crazy roommate Francis had in Puerto Rico, and the nihilistic finale "Gouge Away." Meanwhile, "Tame," and "I Bleed" continue the Pixies' penchant for cryptic kink. But the album doesn't just refine the Pixies' sound; they also expand their range on the brooding, wannabe spaghetti western theme "Silver" and the strangely theatrical "Mr. Grieves." "Hey" and "Monkey Gone to Heaven," on the other hand, stretch Francis' lyrical horizons: "Monkey"'s elliptical environmentalism and "Hey"'s twisted longing are the Pixies' versions of message songs and romantic ballads. Their most accessible album, Doolittle's wide-ranging moods and sounds make it one of their most eclectic and ambitious. A fun, freaky alternative to most other late-'80s college rock, it's easy to see why the album made the Pixies into underground rock stars.
• Numbered, Limited Edition • 33rpm Speed Edition
• Mastering by Mobile Fidelity Sound Lab • Specially Plated and Pressed on 180 grams of High Definition Vinyl
• Special Static Free - Dust Free Inner Sleeve • Heavy Duty Protective Packaging
• Mastered from the Original Master Tapes • Pressed at RTI
Musicians:
Black Francis, vocals, guitars
David Lovering, drums
Mrs. John Murphy, bass, vocals
Joey Santiago, lead guitars 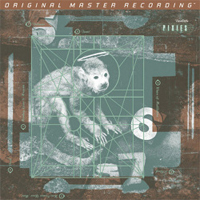