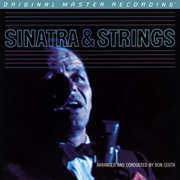 If you want to know what the early 1960’s felt like, listen to this lushly and dramatically orchestrated Sinatra, bathed in opulent, moonlit reverb and surrounded by cushiony strings spread out on an impossibly huge, wide and deep soundstage.

It was a time of urbane, intellectual sophistication. A cool pullback from the “swinging” 1950s. It was a heady, forward-looking time, with Kennedy in the White House and the flying car future seemingly straight ahead.

The visuals were deep, blue nighttime and urban. Strings of cool, pastel colored lights, large panes of rectangular glass and straight architectural lines replaced neon and soft, comfortable curves. There was a sense that the sky was not the limit. Don Costa’s arrangements both reflect and define the times. They cushion Sinatra’s bathed-in-a-reverberant-field voice with billowy, glistening, sweeping strings, softly voiced flutes and just a hint of a rhythm section to give lift to the cloud-like musical entity.

The result is an ethereal, relaxing, yet buoyant listening experience that you float through more than you watch float by. Sinatra covers chestnuts like “Night and Day,”, “Misty,” “Stardust,” “Come Rain or Come Shine” and many other familiar ballads penned by the likes of Cole Porter, Hoagy Carmichael, Richard Rodgers and other greats.

With his voice peaking in richness and power, Sinatra expresses fully the sophisticated, forward-looking mood of the times perfectly pictured by recording engineer and Sinatra buddy Bill M.T. Putnam at his United Recorders studio (part of which is now Ocean Way).

Putnam is in no mood for realism, placing Sinatra’s voice in an enormous, artificial, evocative space dark with rich mystery. It’s an invitation for the mind’s eye to recreate, aided by Mobile Fidelity’s spectacularly clean, detailed yet rich mastering.

A great Sinatra to have if you’re having just one and essential if you have more.

One of the most acclaimed albums of his career, Sinatra and Strings is a brilliant collection of standards sung with spectacular passion and feeling by Frank Sinatra, who at the time of the November 1961 recording sessions, was in peak form.

The 1962 set is Sinatra’s first with arranger Don Costa, and it stands as their finest collaboration. Every song here is a classic ballad, every performance an elegant masterstroke.

Half-speed mastered from the original analog tapes, Mobile Fidelity’s numbered limited-edition 180-gram LP presents "Sinatra & Strings" with a premium sonic fidelity that no other edition, including the original vinyl, has ever had.

Aware of the high quality demanded by discerning Sinatra fans, MoFi engineers took their time in extracting every possible detail and nuance from this gem, resulting a pressing that makes Sinatra and the orchestra come alive in your room.

Nothing is artificially exaggerated or boosted; what you hear is what the artists intended, and the rich sound on this vocal album will satisfy your every need and desire. For Sinatraphiles, this is the ultimate. • Numbered, Limited Edition • 180g Vinyl • 1/2 Speed mastered from the original master tapes 1. I Hadn't Anyone Till You 2. Night and Day 3. Misty 4. Stardust 5. Come Rain or Come Shine 6. It Might as Well Be Spring 7. Prisoner of Love 8. That's All 9. All or Nothing at All 10. Yesterdays 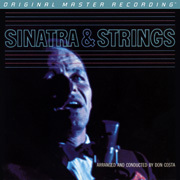