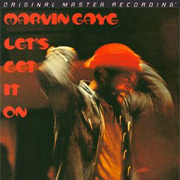 So wrote Gaye in the 1973 record’s liner notes. And who are we to disagree? True to that spirit, Mobile Fidelity has gone back to the original analog master tapes and delivered what is unquestionably the most silky, smooth, and seductive version of Let’s Get It On ever made. This is the pressing you’ve been waiting for, the version that does everything for you but turn down the lights and draw the shades. Seduction, passion, and pleasure don’t get any more automatic.
Track Listing