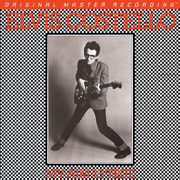 Stereophile 2010 Record to Die For!

Elvis Costello's first, pre-Attractions LP, "My Aim Is True" on MoFi sounds more natural, less crunchy and brittle than my trusty Columbia pressing. Sound dynamics are way better on the MoFi, the Columbia LP is squished to the point it sounds drab. I know it's a cliche, but a MoFi LP really does sound more like a master tape.- Cnet

Elvis Costello's remarkable My Aim Is True announces the arrival of a singular talent. Having long ago secured its status as one of the greatest debut albums ever recorded, the 1977 set hasn't lost any of the vibrant urgency, lyrical edge, or biting wit that made Costello the pin-up model for new-wave music.

The history behind My Aim Is True is as rich as the songs. Before landing at then-fledgling English indie label Stiff Records, Costello had been laboring as a computer operator housed next door to a lipstick factory. The conditions couldn't be riper for the cynical blue-collar observations and fierce humor that pierce tracks like "Welcome to the Working Week" and "Less Than Zero." Costello took inspiration from London subway rides, venomous politics, and surrounding vanity. Having been rejected by what he estimated amounted to every other label in the city, Costello began calling in sick to his day job in order to record material for what become My Aim Is True.

Made for just 1000 pounds and over the course of four six-hour sessions, the experience found Costello recording his parts in a room the size of a telephone booth. His backing band – Clover, not the Attractions (save for on "Watching the Detectives," left off the original UK release) – rounded out the slinky, melodic songs with spare details such as fuzztone pedal steel guitar and organ. The minimal budget ensured that nothing extra or fancy was employed. Overdubs weren't really an option; what was played is basically what you hear.

Notorious for being reissued umpteen times, Mobile Fidelity is thrilled to present the one edition of My Aim Is True that every fan needs to own. Half-speed mastered from the original master tapes – not from copies as so many other versions are – and pressed on 180-gram vinyl, this numbered limited-edition LP is the definitive My Aim Is True. No compromises, no tricks. Just the music delivered with peerless clarity, purity, and transparency. The rawness of Costello's voice, jangle of the rhythms, hum of the organs, and even the impact of the drumsticks have never been experienced with such realism. This is what organic-sounding albums are supposed to sound like. You will hear this again for the first time. And of course, there's the iconic cover art, presented in full-scale perspective.

We don't need to tell you that these will not last. World famous, My Aim is True is a cornerstone of any music collection. Order your numbered limited-edition 180-gram LP  Now

Stereophile 2010 Record to Die For!

Costello on the fuel for his debut: "I spent a lot of time with just a big jar of instant coffee and the first Clash album, listening to it over and over." The music doesn't have the savage attack of the Clash; after all, Costello's backing band was Clover, which would later evolve into Huey Lewis and the News. But songs such as "Mystery Dance" and "(The Angels Wanna Wear My) Red Shoes" have plenty of verbal bite, and the ballad "Alison" is a poisoned valentine. Beginning with the line, "Now that your picture's in the paper being rhythmically admired," My Aim quickly establishes Costello as one of the best lyricists of his generation." - www.rollingstone.com

"In the summer of 1977, Costello was still an aspiring songwriter when he took the Clash’s debut back to his London flat and 'listened to it for 36 hours straight,' he recalled. 'And I wrote 'Watching the Detectives.' Still, he maintained, 'I was never part of any punk-rock thing. I couldn't afford to go to nightclubs at night. I had a wife and kid, and I had to go to work.'" - Rolling Stone

"Some people think 'Alison' is a murder ballad. 'It isn’t,' Costello told Rolling Stone in 2002. 'It’s about disappointing somebody. It’s a thin line between love and hate, as the Persuaders sang.' Costello’s backup band was Huey Lewis' outfit Clover; Lewis himself didn’t play on the album, presumably because Costello didn’t need any harmonica players." - Rolling Stone

As an album that's notorious for being reissued umpteen times, Mobile Fidelity is thrilled to present the one edition of My Aim Is True that every fan needs to own. Mastered from the original master tapes—not from copies as so many other versions are—and pressed on 180-gram vinyl, this numbered limited-edition LP presents the music with peerless clarity, purity, and transparency—just how it was intended to be heard. 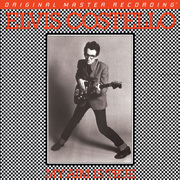