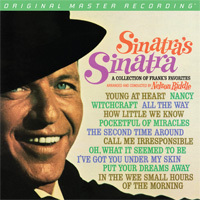 Sinatra's 1963 Studio Record Features New Takes on His Best-Beloved Classics! Every Song Here Is a Pop Staple: Many of Sinatra's Finest Studio Performances. Half-Speed Mastered from the Original Master Tapes for Fabulous Sound! You can't argue with a legend.

And you can't argue with success. So when Frank Sinatra noticed that his former labels, Columbia and Capitol, were banking on his earlier hits by issuing compilations of older material, he decided he'd one-up their strategy. The singer had just formed Reprise, his own imprint, and immediately took control. Released in 1963, Sinatra's Sinatra is true to its name: The enchanting album features Ol' Blue Eyes revisiting a dozen of his best tunes, all selected by the singer, and all deemed to be among his all-time favorites. But what's most important are the performances, and they are amazing, equaling or besting the originals in terms of scope, sound, and phrasing.

As it seems to be with a majority of Sinatra's finest efforts, the involvement of legendary collaborator, arranger and conductor Nelson Riddle looms large. Together, Riddle and Sinatra breathe new life into an incredible selection of pop staples: "I've Got You Under My Skin," "Witchcraft," "Young at Heart," and "All the Way" among them. Sinatra's voice is richer and more mature here than on the original versions, and Riddle infuses the songs with a drive and tempo that add to their enjoyment.  Loving Sinatra's Sinatra is as simple as the record's concept: You know all of these songs, and Sinatra, motivated to show the world he was at the top of his game, performs the material with ingrained passion and peerless emotion. His vocal inflections, Riddle's brilliant arrangements, and the quality of the songs themselves make for an unbeatable combination. Of course, Sinatra spans a gulf of emotions and moods, be it romantic, ruminative, or playfully riled.  And now, Mobile Fidelity engineers have brought staggering sonics to the equation. Half-speed mastered from the original tapes, the 180g numbered limited-edition LP of Sinatra's Sinatra brings you closer to the music and The Voice. Riddle's arrangements have never sounded more spacious, and Sinatra's convincing timbre is clear, transparent, textured, and unbelievably present. Here is a vocal album that will soon become one of your reference favorites.  Don't wait: Rediscover many of Sinatra's best-known songs on an overlooked gem of a record that, for the first time ever, finally has the sound to go along with the tremendous performances!  Features: • Numbered, Limited Edition • Half-Speed Production and Mastering by Mobile Fidelity Sound Lab • Specially Plated and Pressed on 180 grams of High Definition Vinyl • Special Static Free - Dust Free Inner Sleeve • Heavy Duty Protective Packaging • Mastered from Original Master Tapes Selections:  1. I've Got You Under My Skin  2. In the Wee Small Hours of the Morning  3. The Second Time Around 4. Nancy  5. Witchcraft  6. Young at Heart  7. All the Way  8. How Little We Know  9. Pocketful of Miracles  10. Oh, What It Seemed to Be  11. Call Me Irresponsible  12. Put Your Dreams Away