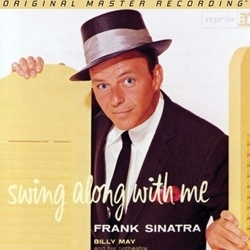 LP Rightly Promoted As “Twelve of the Most Uninhibited Things Sinatra Ever Recorded” Half-Speed Mastered from the Original Master Tapes: Yes, You’ll Be Swinging Few albums are so compelling that they prompt a competing record label to go to court in attempt to block their potential popularity and success. Yet that’s what happened in 1961 when Capitol Records legally forced Reprise Records, Frank Sinatra’s new home, to change the title of Sinatra Swings to Swing Along With Me. Capitol felt that the blockbuster set was too close in sound (and title) to the Chairman’s Come Swing With Me.

Still, the action couldn’t conceal the truth: Swing Along With Me is a phenomenal effort that finds the Voice in mellifluous form. Originally promoted as “twelve of the most uninhibited things Sinatra ever recorded,” Swing Along With Me pairs the legendary singer with arranger Billy May, who leads an orchestra that just doesn’t quit. Just as impressive, the album features the incredible production standards for which the era is famous. The result: Tour de force vocals, fabulous rhythms, grand interpretations, and vivid sonics. Of course, the album is true to its title.

Sinatra rarely, if ever, swung so hard (and effortlessly) as he does here. Whether it’s his timing and voice control (“Don’t Cry Joe”), diction and feeling (“Please Don’t Talk About Me When I’m Gone”), or note-perfect baritone (“Granada”), the Chairman makes the most out of Mays’ brassy arrangements. Several unexpected touches—classically themed instrumental introductions, Spanish-influenced accents—add to the allure. Viewing the record as delivering one giant, swaggering groove after another is simplifying the magic contained within. But Swing Along With Me claims a big-band looseness and nightclub panache that makes it incredibly easy to enjoy. At the time, Sinatra was in the midst of his high-flying Rat Pack days, and he brings that same ring-a-ding-ding spirit to every tune here.

As is the case with all of its Sinatra series reissues, Mobile Fidelity’s numbered, limited-edition 180g analog version is mastered from the original master tapes and tops all previous incarnations. The audiophile label is honored to have the opportunity to present this timeless music in pristine fidelity that enhances the transparency, fullness, timbres, and soundstage so that listeners can experience Sinatra as if he and Mays’ orchestra were only feet in front of them. The connection to the music, and the emotion, is riveting.

"Comparing the recent Mobile Fidelity reissue with the original release proves startling because, immediately, it reveals how rushed Sinatra sounds on the original. This is a guy who has a cab waiting for him outside. Also, on the original pressing, Sinatra resembles the typical “Shouty Man” that blasts his lungs about incredible offers on TV advertisements; such is LP’s well-lit upper midrange effect. Mobile Fidelity’s version issue calms the great man, unveiling the playful Sinatra. Now, with Ol’ Blue Eyes’ delivery during “I Never Knew,” you can almost hear his eyebrow raise and see his half smile appear."

-Tensing, too, on the original, is the soundstage that, on “Have You Met Miss Jones?,” gives the impression of an orchestra falling over itself and before being crammed into a closet. Mobile Fidelity’s 180g LP reorganizes the backing orchestra amidst a space the size of a roomy aircraft hanger; the soundstage expands, allowing each instrument to not only find its place but express itself fully enough to enhance dynamic contrast ratios.

Along with the equally superb The Concert Sinatra, chalk this up as another splendid entry in Mobile Fidelity’s definitive Sinatra reissue catalog. —Paul Rigby Toneaudio 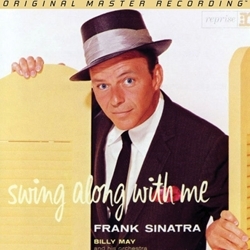