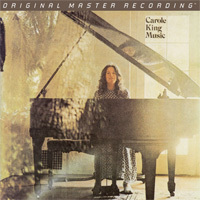 King's 1971 Studio Album a Model of Impeccable Songwriting, Fluent Melodies, Unfettered Expression Released on the heels of her breakthrough, Tapestry, Carole King’s Music is every bit the equal of its more famous predecessor, a Number One smash that features impeccable songwriting, infallible melodies, and extraordinary piano playing. In short, everything that’s made King an institution.

After of years of being overshadowed, this 1971 singer-songwriter classic has finally been given the audiophile treatment it’s long deserved. Half-speed mastered from the original master tapes, Mobile Fidelity’s numbered limited-edition 180g LP of King’s second solo masterpiece is rife with intimacy, transparency, soulfulness, and you-are-there sound. Never before remastered, Music seems like a brand-new album, King’s familiar voice, intelligent arrangements, and ravishing support band presented on a deep, three-dimensional soundstage.

Your appreciation for and understanding of King’s inspirational lyrics and ravishing performances will increase tenfold. Mobile Fidelity’s 180g LP brings you that much closer. Accompanied by percussionist Bobbye Hall, drummer Russ Kinkel, guitarist/vocalist James Taylor, and a cavalcade of professional wind musicians, King delves further into R&B and jazz-derived pop, coming up aces every time. Warm, intelligent, and cohesive, songs echo with simplicity and honesty. And as is typical of much of King’s work, several of tunes here were later covered by other artists, including “It’s Going To Take Some Time” (the Carpenters). Yet the originals trump the later renditions, and the rendition of the standard “Some Kind of Wonderful” stands as the best ever recorded.

With Taylor lending more of a hand on Music than he does on Tapestry, King expands her confident reach on the piano and peppers the songs with graceful touches of saxophone, flute, pedal-steel guitar, and woodwinds. Ballads sway (“Surely”), gospel brightness lifts spirits (“Brighter”), and backup vocals float heavenly pop (“Song of Long Ago”). Yet the best aspect is King’s voice, infused with fondness, concern, joy, and a quiet power that parallels the delicacy and deliberate nature that define Music.
Mobile Fidelity’s audiophile edition is free of the limiting artifacts that have helped keep this record in the dark for the better part of the past few decades. Previously diminished, acoustic guitars, subtle brass elements, and soft percussion contribute to the enjoyment of the songs, and King’s voice—pleasant, assuring, emotional—comes through with incredible clarity and inflection. The brilliance of the legendary Lou Adler’s original production is restored to its full glory.
If it’s at all possible—and it is—this treasure now sounds even more heartwarming than it did upon original release. The companion to Tapestry, Music is an aural—and sonic—delight.
Carole King Music Track Listing:
1.    "Brother, Brother" – 3:00
2.    "It's Going to Take Some Time" – 3:35
3.    "Sweet Seasons" – 3:15
4.    "Some Kind of Wonderful" – 3:07
5.    "Surely" – 4:58
6.    "Carry Your Load" – 2:52
7.    "Music" – 3:50
8.    "Song of Long Ago" – 2:44
9.    "Brighter" – 2:46
10.    "Growing Away from Me" – 3:03
11.    "Too Much Rain"  – 3:35
12.    "Back to California" – 3:23 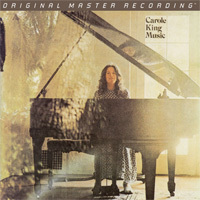