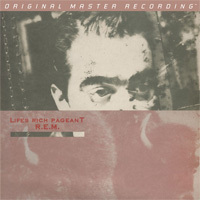 Mastered by Shawn R. Britton from the Original Master Tape

Very few albums are regularly credited with changing people’s lives. R.E.M.’s Life’s Rich Pageant is one of them.

For a generation that came of age in the '80s, as well almost everyone that came within earshot of its contents, the Georgia band’s 1986 landmark effort remains an utterly distinctive sonic blend of elegance and whimsy, seriousness and humor, artfulness and accessibility.

It’s here that R.E.M. evolves beyond its college-rock identity albeit retains its youthful innocence, here where Michael Stipe’s enigmatic vocals finally attain the same level of prominence as the group’s potent rhythm section.

Half-speed mastered from the original master tapes and meticulously pressed at RTI, Mobile Fidelity’s 180g LP version of this masterwork allows the record’s expressive punchiness, dynamic extension, treble-driven jangle, and more forceful playing to be experienced as originally intended. Indeed, Life’s Rich Pageant is notable for its production: Board operator Don Gehman lends the group a harder edge and cleaner sound than it had in the past. On this audiophile-grade reissue, the results come to the fore in the form of contemporary-sounding arrangements, cohesive structures, and cleaner tonalities. If anything, this LP helps make the case for the many that Life’s Rich Pageant—not Murmur or Reckoning—stands as the band’s finest hour. Lyrically, R.E.M. hits upon more concrete themes, and while Stipe’s occasionally mumbled singing still lacks clear enunciation — a trait that adds to the songs’ mystique and surrounding textures — there’s no mistaking the overt political and environmental sentiments in tunes such as the hit “Fall on Me” and gorgeous “Cuyahoga.” Similarly, “Flowers of Guatemala” epitomizes R.E.M.’s hallmark ability to turn allegory into dreamy poetry, the counterpoint melodies, atmospheric guitar fills, and majestic bridges all enchanting devices of a band that manages to get its point across via spiritual performances and indirect suggestiveness. Such qualities lie at the heart of Life’s Rich Pageant, on which subtle details and concerted purposes unite to make transcendent, lasting art. Bolder, more pronounced, refined, and immediate than that on previous efforts, Mike Mills’ bass lines and Peter Buck’s swelling guitar passages augment the hard-driving beats as well as Stipe’s increasingly upfront vocals. Disposing with the intentional murkiness and subconscious approach of earlier records, R.E.M. goes in attack mode here, with even mellow numbers resonating with an attention-getting kick. It doesn’t hurt that the band covers the field with expertly executed songs that comprise garage rock, jangle pop, rustic country, and more. What a record. We don’t need to tell you about R.E.M.’s importance to modern music. And this record plays a large role in establishing the group’s reputation.  Features: • Numbered, Limited Edition • Half-Speed Production and Mastering by Mobile Fidelity Sound Lab • Specially Plated and Pressed on 180 grams of High Definition Vinyl • Pressed at RTI • Special Static Free - Dust Free Inner Sleeve • Heavy Duty Protective Packaging • Mastered from the Original Master Tapes Selections:
Dinner Side: 1. Begin the Begin 2. These Days 3. Fall On Me 4. Cuyahoga 5. Hyena 6. Underneath the Bunker Supper Side: 1. The Flowers of Guatemala 2. I Believe 3. What If We Give It Away? 4. Just A Touch 5. Swan Swan H 6. Superman 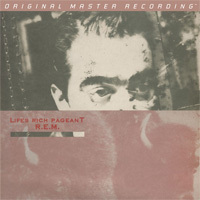