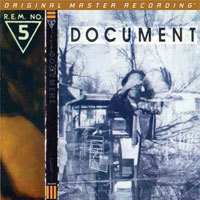 The last album R.E.M. made before migrating to Warner Bros., and very arguably the last start-to-finish masterpiece the band created in its acclaimed career, Document turned Georgia’s celebrated sons into mainstream stars. Musically unadulterated and sonically pure, the group’s 1987 work epitomizes the unmistakable sound and feeling of college rock during a period where innocence, experimentation, and adventurousness freely collided before being co-opted and branded as “alt-rock.” Document is the record to which everyone refers when citing R.E.M. as the premier example of how a respected band is expected to behave, evolve, and maintain its integrity after experiencing mass success.

Half-speed mastered from the original master tapes and carefully pressed at RTI, Mobile Fidelity’s numbered limited-edition 180g LP edition of this breakthrough set explodes with unrivaled instrumental signatures, deep soundstages, and faithful tonalities that allow listeners insight into the actual makes and models of the guitars utilized on the recording. Sharp and clean, Scott Litt’s widescreen production throws the band into clear relief, magnifying its razor-edged melodies and drummer Bill Berry’s foundation-establishing beats. R.E.M. has never sounded so muscular or righteous.  Indeed, the quartet plays as if on a mission, its electrified energy teeming with a contagious fervor that helps fuel political numbers such as “Welcome to the Occupation,” “Exhuming McCarthy,” “Disturbance at the Heron House,” and “King of Birds.” R.E.M. comes into its own, peeling back the layers on vagueness and utilizing Michael Stipe’s biting lyrics and Mike Mills’ amped-up guitar riffs to punctuate its catchy fare. Aptly, songs dance around a central image of fire.  The group’s hallmark jangle-pop motifs and swooning refrains remain, yet they exhibit a determined attitude and wily quality that brings everything up to another notch. Toss in surf-rock fills, feedback accents, deep-South rootsness, and subversive undertones, and Document stands as near-flawless statement: A reaction to the social and material currency of its era, a call-to-arms to overcome trauma via hope, humor, and justified anger.  All these characteristics bleed into the manic anthem “It’s the End of the World As We Know It (And I Feel Fine),” a renegade shot of beat poetry, delirious delivery, punk-infused vitality, and bounce-around-the-room chaotic abandon that never grows stale. Is R.E.M. serious or joking? Or both? Part of the genius is that it’s still impossible to tell. R.E.M. delights in taking listeners for a ride on Document, the swerving, drifting, stylistic interplay, and brief detours all of a whole, the group relishing in the fun of going for broke and succeeding at all of its goals.  We don’t need to go on about R.E.M.’s standing as a group that’s influenced countless artists and inspired millions of listeners. If you own just one of the quartet’s albums, it should be Document. Features: • Numbered, • Half-Speed Production and Mastering by Mobile Fidelity Sound Lab • Specially Plated and Pressed on 180 grams of High Definition Vinyl • Pressed at RTI • Special Static Free - Dust Free Inner Sleeve • Heavy Duty Protective Packaging • Mastered from the Original Master Tapes Selections:
Side One:
1. Finest Worksong 2. Welcome To the Occupation 3. Exhuming McCarthy 4. Disturbance At the Heron House 5. Strange 6. It's the End of the World As We Know It (And I Feel Fine) Side Two:
1. The One I Love 2. Fireplace 3. Lightnin' Hopkins 4. King of Birds 5. Oddfellows Local 151 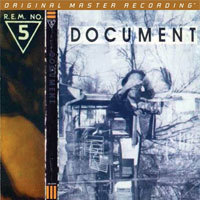