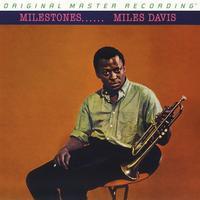 Mofi  has resurrected two albums from the Columbia  vaults that demand to find a home in every jazz collection. ’Round About Midnight and Milestones, reissued here in glorious mono sound, catch Miles Davis and his quintet/sextet in formative performances from the late 1950s of what could arguably be called post-bop modern jazz.MoFi has hit the ball out of the park with these reissues. They are essential listening -- and purchases.  Tone Audio Sound 4/5 Music 5/5

Anyone with an interest in post-war jazz knows these albums. Their historical importance is unquestioned. The question posed to me as a reviewer is whether or not the reissues do justice to the originals. The answer is a resounding yes, though, for whatever reason, the reissues are cut at a lower level than the originals. That the nature of the recording venue, a former church with hardwood floors and draped, plaster walls, was just slightly easier to discern on the originals caused me no concern. It was so close that on repeated listening I began to believe it was just my imagination. You can spend a lot of time, energy and money looking for clean original six-eye pressings, or you can just send a check to Mobile Fidelity for these and be happy. Mobile Fidelity used its GAIN 2 Ultra Analogue System in mastering these LPs, a proprietary cutting system built and designed by audio innovator and legend Tim De Paravicini with assistance from MoFi pioneer Stan Ricker. Half-speed mastering is done using only first-generation tapes as a source, played back on a customized Studer tape machine and hand-built cutting amps driving the Ortofon cutting head of a restored Neumann lathe. The lacquers that result are sent to RTI for numbered limited-edition pressings. I doubt very much you’ll find 56–year old originals with surfaces as quiet and blemish free as these. MoFi has hit the ball out of the park with these reissues. They are essential listening  and purchases. TheAudioBeat Review

Vanguard Sonics: Mobile Fidelity Reissue Presents The 1958 Standard with Unparalleled Sound Quality! This Masterwork is Oft-Overlooked Link Between 'Round About Midnight and Kind of Blue. In MONO—You Will Not Hear a Better Analog Edition! Only Record to Feature Davis’ Original Sextet, Including Rhythm Section of Paul Chambers and Philly Joe Jones. Title Track Stands as First-Ever Modal Composition Even as Blues and Hard-Bop Flavors Make LP One of Davis’ Most Explosive Affairs.

Due to its sandwiched position between the more famous ‘Round About Midnight and epochal Kind of Blue, Milestones remains, for too many music lovers, an overlooked classic. Part of Mobile Fidelity’s Miles Davis catalog restoration series, Milestones has been restored to mono for the first time as to expose the record’s standing as one of the all-time great jazz efforts.Mastered from the original master tapes and pressed at RTI, this unsurpassed 180g mono LP edition grants each musician their own space in a well-defined, broadened soundstage. 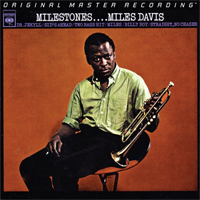