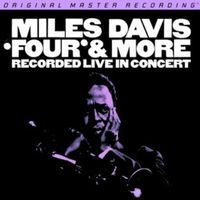 From the first down beat... WOW! Great band, Great sound The sonic credentials of this LP are above reproach. Mobile Fidelity. After hearing these four, I think it’s worth taking out a loan to buy them all. Miles Davis was one of the true geniuses of American music, and it is essential to hear him in the best pressings available Sound 5/5 LP Audio

Live Set Documents One of Davis’ Final Excursions With a Program of Standards Given his gargantuan recorded output, Miles Davis seldom abandoned a conceptual vision in the studio, particularly after the turn of the 1960s. Which makes a live document such as Four & More all the more valuable for the manner in which it portrays the legendary trumpeter removed from thematic demands and interior confines, and instead letting loose onstage with a program of stellar material that he’d soon abandon in favor of experimentalism.