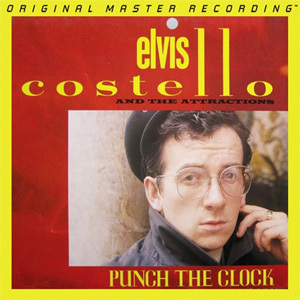 Akin to the reissue label’s previous acclaimed Costello reissues, Punch the Clock is vastly improved, the opened-up perspective, pronounced instrumental separation, and textural clarity enhancing all the details within the grooves. Fresh from making a country tribute album and a large-scale set flush with complex arrangements, Costello and Co. return to straight-ahead pop given a decidedly British accent and soulful backing vocals. Conscious of the Merseybeat sound and success of Dexy’s Midnight Runners, Costello tints songs with new-wave characteristics, splashy horns, and spontaneous vocal-response support courtesy of female duo Afrodiziak, one member of which later attained fame with Soul II Soul. Steve Nieve’s bounding piano lines dance throughout the arrangements, adding witty pizzazz and delicate allure to already-tuneful fare like “The Element Within Her” and “Mouth Almighty.” The more direct, hook-ready approach also manifests on numbers such as “Let Them All Talk” and “Charm School,” tunes that also illustrate the contrasts in romantic theme. While remaining deeply cynical, as was his longtime hallmark,

Costello unfurls two compositions on which love and marriage are viewed in a positive light. Yet he spares no one, nothing, and minces no words with “Shipbuilding” and “Pills and Soap,” fare that remains revered in his native country as well as abroad. For “Shipbuilding,” a brilliantly disguised 88s-clinking protest against war influenced by the Falkan Conflict, Costello enlists jazz legend Chet Baker to deliver a masterfully poignant, bluesy trumpet solo that echoes throughout the coda. On the hip-hop-inspired “Pills and Soap,” a thinly veiled metaphor addressing Britain’s abusive sociopolitical state and royal officials, the bespectacled bandleader invents a thoroughly unique quasi-rap draped over a drum-machine beat and Nieve’s bold piano chords. Bracing. 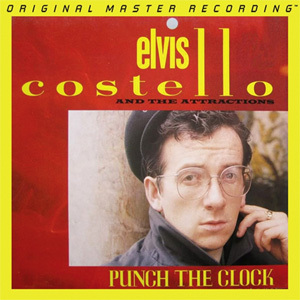