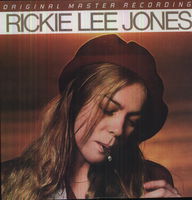 Of course,the music and recording quality is stunning. This lp blows away the cd, especially, in the low end. LP Review

Hip, Jazzy Debut as Fresh Today As It Was in 1979 Rickie Lee Jones was hip before hipsters came of age. Wearing a beret, exuding supreme cool, and visually demarcating herself as a member of a bohemian underground, her image on the cover of her self-titled debut says as much about the singer-songwriter as it does the music within the grooves. Uninterested in coloring within the lines, Jones steps out, a dreamer in the post-punk age, an adventurous drifter seemingly deaf to the noisiness of her era. No wonder the work remains one of the most impressive opening salvos in history.

Mastered from the original master tapes, our180g LP edition of Jones’ double-platinum 1979 smash finally gives listeners the ultimate version of this long-adored masterpiece. Always prized by audiophiles for its sonics, the record now breathes with a clearer air, with enhancements in dynamics, imaging, soundstaging, and frequency extension apparent seconds after the needle touches down on the opening grooves. Jones’ singular, jazzy vocals—straddling territory between youthful surprise, street-smart sharp, and grown-up seriousness—take on stupendously lifelike qualities to the extent you can hear into her lungs. Emerging from a quiet Los Angeles scene that also laid claim to Tom Waits, a former love interest, Jones reflects an undiminished capacity for fusing folk, R&B, pop, jazz, and scatted word poetry on an effort that matches the flexibility and elasticity of the artist’s creative approach. As if playing games of hide and seek, Jones often dances around conventional syllabic phrases, using her delivery to stretch language and vowels, turning in diction that’s at once gorgeous and enterprising.

She taps into a subtlety of texture and ambience well beyond her then 23-year-old age, inserting sly humor when apt, and never shying away from raw emotion. Renowned for the Top 10 hit “Chuck E’s In Love,” Rickie Lee Jones overflows with finger-snapping be-bop accents, funky cabaret melodies, bluesy bridges, soothing balladry, and even Westernized fills. Subdued complexities flavor the arrangements, expressly tailored for Jones’ portrait-rich storytelling and character-driven narratives. Such diversity is on display on the metaphorical heartache of “Last Chance Texaco,” reflective “Company,” and corner-hangout musings of “Danny’s All-Star Joint.” Throughout, intricate guitar lines give listeners further reason to concentrate on the tunes.

Back in the beginning of 1979, when this record made its debut, it became a demo staple in every hi-fi store. Even the original pressing sounded decent, and budding vinyl enthusiasts can usually find a clean copy for a few bucks about anywhere.
Both the original MoFi and the current MoFi remasters have more dynamics and quieter surfaces than the original WB pressing, and each will set you back about $30.  However, the current MoFi release exceeds its predecessor in every way but one: the “smiley face” EQ. (For those unfamiliar with this term, it means that the upper treble and lowest bass frequencies have been slightly boosted in the attempt to gain some listenability, more excitement, if you will.) Pressed on the original JVC “Super Vinyl,” the original is still a smidge quieter than the current pressing, which is excellent.
It’s up to you whether you bypass the first track, “Chuck E’s in Love,” since it was played to death on the radio and MTV. The rest of the record still holds up after all these years, with great arrangements and a stellar cast of musicians, including Dr. John, Tom Scott, Randy Newman, Jeff Pocaro and Neil Larsen, to name just a few.
Bass response is now sorted, there is more midrange palpability and ambience throughout, and the record now reveals a higher degree of low-level detail.  Jones’ voice possesses more decay on all tracks, and those that have frequently listened to this record will notice more nuance from beginning to end.  And, while this album has grooves going almost all the way to the center label, MoFi did a much better job of cutting this copy. The inner-groove distortion creeping in on the label’s original is eliminated, another bonus.  -Jeff Dorgay Toneaudio
Numbered, Limited Edition • 33rpm Speed Edition
• Mastering by Mobile Fidelity Sound Lab • Specially Plated and Pressed on 180 grams of High Definition Vinyl
• Special Static Free - Dust Free Inner Sleeve • Heavy Duty Protective Packaging
• Mastered from the Original Master Tapes • Pressed at RTI

9. Weasel and the White Boys Cool 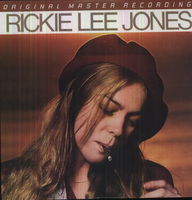