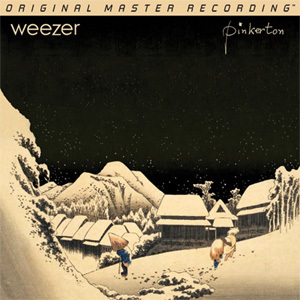 Few records claim as bizarre a history as Weezer’s Pinkerton. Upon release in 1996, the band’s sophomore effort failed to meet sales expectations, lacked a hit single, and drew primarily negative reviews from the press. Then, via word of mouth and reevaluation, the Little Album That Could began to build a reputation as an initially misunderstood masterwork—a bold, brave, and exposed creation that happened to have hyper-contagious hooks to accompany the confessional lyrics. Today, it’s cited on virtually every Best Albums of the 1990s list in existence.  Mastered from the original master tapes and pressed on 180g LP at RTI, Mobile Fidelity’s analog version of the effort Rolling Stone awarded a full five-star review upon revisiting it eight years later brings the band’s live-in-the-studio vocals and darker, raw feel to the surface like never before. Leader Rivers Cuomo’s decision to record group choruses around three microphones rather than capture them separately finally can be experienced as originally intended, with the immediate vibe paying off in the form of more engaging, edgier results that parallel the songs’ personal emotions and frustrated themes. Guitars, which scrape and push, augmenting the trials and tribulations documented in the narratives, are finally rendered in proper perspective.  Comprised of nonfiction tunes largely based on Cuomo’s dissatisfaction with rock-star life, and written by the singer/guitarist as he attended school at Harvard University, Pinkerton confronts disappointment, loneliness, isolation, awkwardness, and cruel romantic irony with a universal perspective to which anybody can relate. Cuomo selected the character Lieutenant Pinkerton from Puccini’s Madame Butterfly as a touchstone, believing the persona symbolic of the tormented protagonists in his songs—and recognizing similar struggles to come to terms with identity.  Weezer’s aims on Pinkerton have connected with many that identify with its narratives and adore its surfeit of melodies. Surpassing cult-classic status and conquering fickle tastes, the record ranks in Guitar World’s “Top 100 Guitar Albums of All-Time”; Spin’s “100 Best Albums From 1985 to 2005”; Pitchfork’s “Top 100 Albums of the 1990s”; and Rolling Stone’s Hall of Fame.  For all the malaise, Pinkerton also contains beloved wit and humor. Shyness and hands-in-pocket diffidence inform “El Scorcho”; incongruity and surprise surround the simultaneously funny and sad “Pink Triangle”; tedium and desire collide on the cynical “Tired of Sex.” Psychosexual confusion, unrequited passion, and good intentions elicit unintended sympathies, a trait that remains one of the record’s brilliant turns.  Part of Mobile Fidelity’s Weezer catalog restoration series, don’t pass up the chance to secure your lowest-numbered copy of this incredible album.   Features: • Numbered, Limited Edition • Half-Speed Production and Mastering by Mobile Fidelity Sound Lab • Specially Plated and Pressed on 180 grams of High Definition Vinyl • Special Static Free - Dust Free Inner Sleeve • Heavy Duty Protective Packaging • Mastered from the Original Master Tapes • Gatefold Jacket 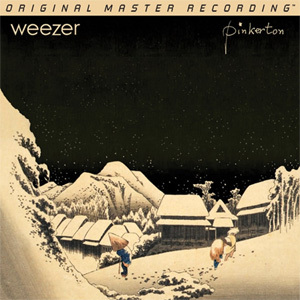