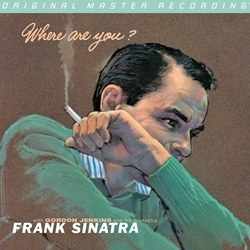 Krieg Wunderlich has hit another home run with this Sinatra classic. Compared to a first US pressing, the pitch stability is more spot-on and the string sound much fuller. Another gem polished to perfection." --HiFi+, Issue 98, March 2013

Where Are You? is perfect in every sense. Recorded when Frank Sinatra was 42, the torch album finds him in impeccable voice and spirit. The dozen tracks fit together as a unified whole; it’s difficult to imagine one song missing, or another added. Arranger Gordon Jenkins reads Sinatra’s mind, affording him with lush arrangements that break hearts and underscore deliberation. Topping it off, Sinatra’s interpretive skills utterly astonish. Genres aside, this 1957 Capitol classic is inarguably one of the ten-best vocal pop efforts made in the 1950s.

The record’s splendid beauty and unparalleled emotionalism surface like never before on Mobile Fidelity’s numbered, limited edition 180g mono LP. Mastered from the original master tapes, this mono version focuses the instrumentalists, images, vocals, and ambience in a transparent manner that exceeds the detail on the more-common stereo version. In addition, this reissue marks the first time this gem has been made available in mono in several decades. Akin to Mobile Fidelity’s previous Sinatra titles, the sound and clarity on this LP takes the Voice into your room, puts him on an imaginary studio stage, and gives you your own private concert. While not as known as Only the Lonely, Where Are You? is its creative equivalent, a poignant masterwork on which Sinatra reflects on what could have been, ponders life’s deep questions, elicits sympathy via romantic distress, and does whatever it takes to get through the night. It is one of Sinatra’s alone-at-the-bar statements, his fedora pulled slightly over his eyes, his face fixated on his drink, his only friend the understanding bartender that will keep pouring until last call. Throughout, Sinatra delves into sorrow and desolation. Yet unlike the stark gloom and bleak bitterness on In the Wee Small Hours, this solitary statement echoes with an accepting wistfulness and maturity that parallels a change of seasons—or situations. Jenkins’ warm, classically informed arrangements grant Sinatra the sentiments and support he needs. The sumptuous melodies and burnished strings complement the singer’s completely natural delivery; seldom has Sinatra sounded so relaxed, dramatic, warm, cello-like, and in a zone. His lyrical phrasing and rhythmic time-keeping are spot-on; his soulfulness and sensitivity of another world. Sinatra’s renditions of “Laura,” “Autumn Leaves,” and “Lonely Town” are the reference-bearing performances of these famous standards. If you are a fan of vocal music, consider this album mandatory.
"Nobody ever did this kind of theme album better, and no record company ever captured Sinatra during his prime like Capitol…[Mobile Fidelity engineer] Krieg Wunderlich has hit another home run with this Sinatra classic. Compared to a first US pressing, the pitch stability is more spot-on and the string sound much fuller. Another gem polished to perfection." 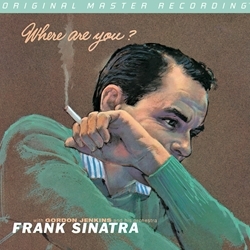