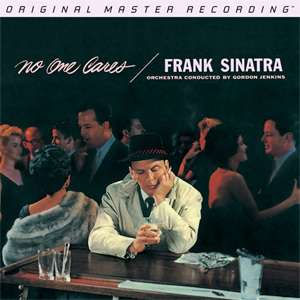 Sometimes it’s okay to judge a book by its cover. Depicting a down-and-out Frank Sinatra entrenched in his own private world while glamorous couples dance and swirl around him, oblivious to his presence and condition, the artwork to the aptly titled No One Cares testifies on behalf of the music and moods within the record’s grooves. One of the crooner’s top-flight ballads efforts, the 1959 Capitol effort again finds him pairing with sympathetic arranger Gordon Jenkins and inhabiting each note of every song.

Hear the fruits of this timeless collaboration in fresh light on numbered, limited edition 180g LP. Mastered from the original master tapes, this newly minted version of No One Cares caresses the senses via its profound instrumental depth, widescreen soundstage, front-to-back perspective, transparent high-frequency responses, and dynamic midrange. Neither too close-up nor too distant, Sinatra’s voice is rendered with realistic scale and gorgeous balance to the extent that nothing is artificially sweetened or heightened. Akin to Mobile Fidelity’s previous Sinatra reissues, this LP is meticulously rendered to the highest-possible standards, ensuring that the fidelity is in line with the timeless performances and the iconic singer’s exacting standards.

Often viewed as the sister album to 1957’s Where Are You?, this third pairing of Sinatra and Jenkins yields slower tempos, more deliberate textures, and lonelier emotions. A profound sense of tragedy burrows into both the luscious strings and Sinatra’s timbre, laced with ache, wanderlust, and dismay. Jokingly referred to by Ol’ Blue Eyes as one of his “suicide albums,” it instead harnesses the wrenching agony, painful solitude, and desolate helplessness that accompany romantic loss and failure of fulfillment. They’re universal sentiments, and sensations Sinatra convincingly conveys, envisioning himself as the protagonist in each of the songs.

Rich and fully developed, the arrangements consistently trace Sinatra’s footsteps rather than ever overwhelming or competing with him. Instrumental flourishes accent the Voice’s own swells and silences, while a classically stated elegance and plaintive devices contribute to an underlying subtlety. Rare has a singer achieved frank introspection and reflective intimacy in such hurtful, believable fashion. Sinatra’s voice comes on without a hiccup, his phenomenal baritone and breath control epitomizing ageless singing. You don’t want to be without this one.

• Numbered, Limited Edition • Half-Speed Production and Mastering by Mobile Fidelity Sound Lab • Specially Plated and Pressed on 180 grams of High Definition Vinyl • Special Static Free - Dust Free Inner Sleeve • Heavy Duty Protective Packaging • Mastered from the Original Master Tapes Musicians: Frank Sinatra, vocals Gordon Jenkins, conductor Selections:
Side One: 1. When No One Cares 2. A Cottage for Sale 3. Stormy Weather 4. Where Do You Go? 5. I Don’t Stand a Ghost of a Chance With You 6. Here’s That Rainy Day Side Two: 1. I Can’t Get Started 2. Why Try to Change Me Now? 3. Just Friends 4. I’ll Never Smile Again 5. None But the Lonely Heart 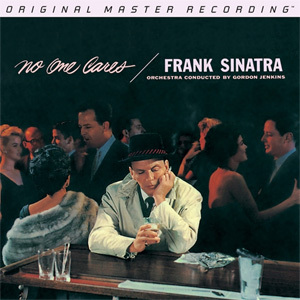