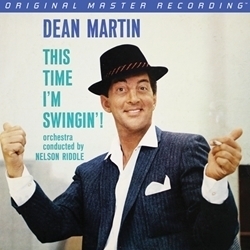 Mastered from the Original Master Tapes: No Martin Album Sounds Like This

Dean Martin was always at his best when he sounded effortless, when the singing required no exertion—just the same amount of investment required to order a martini. Confident, refined, breezy, and easygoing, this 1960 Capitol album epitomizes the crooner’s charm. In pairing with arranger and Frank Sinatra right-hand-man Nelson Riddle, Martin strikes all the right notes on this collection of then-recent and retro standards.
Mastered from the original master tapes, Mobile Fidelity’s 180g LP gets inside the core being of Martin’s impeccably smooth, relaxed singing by presenting every phrase, dip, and inflection with lifelike realism. The disc does similar wonders for Riddle’s backing orchestra. Horns teem with punch and midrange; rhythms possess incredible pacing; strings saunter and float. No Martin album has ever sounded like this. Mobile Fidelity also secured the rights to a bonus track, "Ain't That a Kick in the Head," left off the album and released as a single in order to promote the movie Ocean's Eleven.

While Martin enjoyed his biggest commercial success at Reprise, the aptly titled This Time I’m Swingin’ is considered by many critics and vocal-pop fans to be his finest studio hour. He approaches each song with supreme confidence and debonair control, never overreaching his limits or breaking a sweat. Here, he more than lives up to his nickname: The King of Cool. Charismatic, assured, and note-perfect, the album belongs alongside any of the period sets cut by his pal and once-and-future labelmate Sinatra. No wonder that his most recognized hit, the aforementioned and included “Ain’t That a Kick in the Head,” was actually cut at these sessions.

Riddle’s expert ordering of the charts and direction of horns, strings, and piano equates to jazz and swing genius. Brass blows hard and strong during breaks, calm down for verses during which slinky 88s and swaying strings join the dance, and then rise up, the mix elegantly performed and irresistibly catchy. If you’re not snapping your fingers and instantly transported to a swank nightclub within the first few passages of the opening “I Can’t Believe That You’re In Love With Me,” check your system’s setup.

Yet Martin is the real star. Hearing him handle such classics as the devotional “I’ve Grown Accustomed to Her Face,” upbeat “You’re Nobody ‘Til Somebody Loves You,” hopeful “Someday (You’ll Want Me to Want You),” bluesy “You’re Mean to Me,” and clever “Please Don’t Talk About Me When I’m Gone” with such aplomb—and now, in such ravishing detail—will remind you why you love music, and why nothing of this ilk will likely ever be made again.

Martin convincingly conveys the mood each song demands, but a sense of optimism, playfulness, and feel-good romance pervade this stylish effort. If you are a fan of real singing and emotional crooning, you cannot live without this  edition. 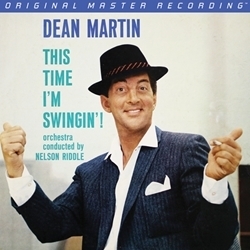