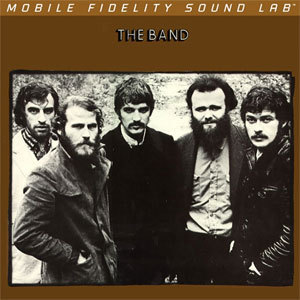 A completely successful major restoration of one the great records of the rock era and that includes the jacket, which is perfect in every way. The longer I live, the more I find myself marveling at the beauty of "Whispering Pines". It has come to be my favorite song on the record. I have never heard it revealed as cleanly as on this reissue. Sound  9/10 Michael Fremmer - Analogue Planet

Incalculably Influential: The Band’s Self-Titled Sophomore Release a Country- and Folk-Rock Benchmark Includes Staples “The Night They Drove Old Dixie Down,” “Across the Great Divide,” “Up On Cripple Creek”

Many believe it’s the most perfect Americana album ever made. The 1969 touchstone very well may be. Advancing the chemistry and cohesion of the group’s ground-shifting debut, The Band is an inimitable distillation of compelling storytelling, cosmic divinity, loose country-rock tunefulness, and superbly crafted songwriting. Warm, literate, poignant, and intimate, the record established new standards for seemingly effortless telepathic interplay among first-class musicians whose creations are as much about feeling as they are about sound.

Mastered on Mobile Fidelity’s world-renowned mastering system and pressed at RTI, this collectable LP burrows into the sonic heart of hearth-rich fare that balances Appalachia’s mountain flavors, the Old West’s rollicking free spiritedness, Canada’s limitless vast folk sprawl, and the Deep South’s whiskey-soaked drawl. Arkansas native Richard Helm blends his rural roots with guitarist Robbie Robertson’s allegorical narratives, the pair meeting at a crossroads that, on this pressing, reveals textures as organic as cotton and tonalities as timeless as the look of classic filmstrips. Notes hover and naturally decay; cascading harmonies waft and reverberate; soundstages open up and extend, providing generous spaces for each member’s invaluable contributions to relax, settle, and enter into a wholesome communion.

From the swampy bayou grooves, jaw-harp-mimicking clavinet passages, and traditional yodels found on “Up on Cripple Creek” to the jubilant dance persuasion of “Rag Mama Rag,” The Band blends mythological devices with authentic melodies, rustic acoustic properties with haunting harmonies. Universally identifiable, the characters in the songs are people well-versed in hardship, depression, working-class struggle, and Skid Row trouble. Musically, the group balances sweetness and edginess on all of its foundational material, capturing the essence of American music and culture like no band before or since.

So here's the deal: if you have a clean "RL" original, you'll find that overall this reissue is not quite as immediate as the original but Tim DeParavicini's reworking of Mobile Fidelity's cutting chain and the nuanced EQ choices made by mastering engineer Krieg Wunderlich do for this reissue what they did for Blonde on Blonde: they effortlessly unravel detail against the jet black RTI pressing that will have you marveling at both how much new information is revealed and how much cleaner, more three-dimensional and transparent is much of what you already heard in this masterpiece. Mobile Fidelity has cleaned off the patina without destroying the "old-timey" atmospherics Robertson strove to inject into the proceedings both in the songs and in the engineering and mix.

A completely successful major restoration of one the great records of the rock era and that includes the jacket, which is perfect in every way. The longer I live, the more I find myself marveling at the beauty of "Whispering Pines". It has come to be my favorite song on the record. I have never heard it revealed as cleanly as on this reissue.

The Band The Band Track Listing: 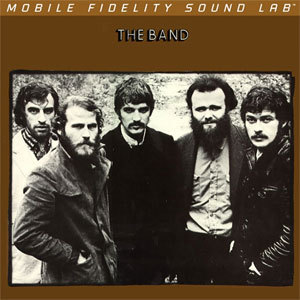