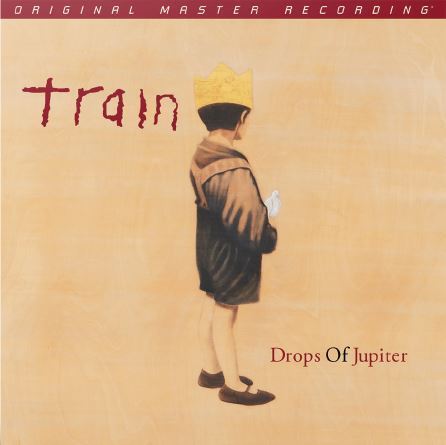 There’s nothing wrong with echoing classic rock and harmonic pop sounds, especially when it’s done this well. Drops of Jupiter, Train’s two-time Grammy-winning 2001 album, revels in sweeping hooks and soulful comfort borrowed from proven 70s methods. At its core, the San Francisco quintet’s sophomore record is the result of what happens when concerns about trends and coolness are put aside and solid, genuinely earnest music is made the primary focus.

Mastered from the original master tapes and pressed at RTI, Mobile Fidelity’s 180g vinyl LP brings listeners much closer to the group’s roots-rock instrumentation and vocalist Pat Monahan’s smooth tonalities. Free of the harshness, boxiness, and flatness discernible on the CD, it breathes with an openness and airiness that grants the music translucent qualities. Previously restricted, dynamic headroom and instrumental separation are enlarged and enhanced. Suffice it to say that this modern classic has never sounded anywhere this good. It’s a record made for experiencing on vinyl, and one timeless in construction and mood.

Side One:
She's On Fire
I Wish You Would
Drops Of Jupiter
It's About You
Hopeless
Respect