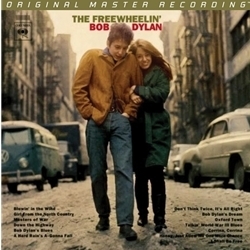 Michael Fremer Rated 10/10 Music, 10/10 Sonics!    - Winner of a Gruvy Award, chosen by AnalogPlanet's editor, Michael Fremer, for vinyl records that are musically and sonically outstanding and are also well mastered and pressed.

Dylan’s 1963 Sophomore Effort Marks the Beginning of a Cultural Sea Change Wider Grooves, Superior Sound: Mobile Fidelity’s 45RPM Edition The Last Word in Analog Fidelity Record’s Ambitious Poetry, Melodies, and Moral Conviction Transformed Songwriting, Folk, and Pop  It’s the album the ignited sea changes in pop culture, music, songwriting, poetry, and the social consciousness. It’s the creation of a 22-year-old visionary still years away from casting a jaundiced eye to the media. It’s the sound of change, the feeling of ground shifting beneath one’s feet, and the entrance of an entirely new way of thinking. It’s the effective beginning of what’s arguably the boldest career in music history, the yawning vortex into the complex mind, supernatural wordplay, and folk techniques of a vocalist/guitarist whose name is forever associated with transformation. It’s The Freewheelin’ Bob Dylan.

As part of its Bob Dylan catalog restoration series, Mobile Fidelity is thoroughly humbled to have the privilege of mastering the iconic LP from the original master tapes and pressing it on 45RPM LPs at RTI. The end result is the very finest, most transparent analog edition of The Freewheelin’ Bob Dylan ever produced. Never before has the resonance of his nylon guitar strings, fingerpicked notes, shivering harmonica fills, or plainspoken timbre possessed such clarity, openness, body, or realism.

With the advantage of wider and deeper grooves, the 45RPM pressing affords the opportunity to detect more information and lavish in extra richness. Whether it’s the exaggerated nasal accents employed on “Down the Highway” or the decay of each strummed line on the entirely acoustic album, previously concealed details, microdynamics, and ambient cues surface—enhancing the listeners’ experience and taking them inside Columbia’s Studio A where history was made by leaps and bounds.

Exponentially surpassing the potential he demonstrated on his debut, Dylan became a mirror of the concerns, issues, and feelings confronting the nation. Writing and singing with penetrating honesty, observational wit, moral conviction, and scathing emotion, he digs into the madness of war (“Masters of War,” “A Hard Rain’s A-Gonna Fall”), hypocrisy of segregation (“Oxford Town”), urgency of civil rights and freedom (“Blowin’ in the Wind”), and multiple angles of unrequited love (“Girl From the North Country,” “Don’t Think Twice It’s All Right”) with a literate astuteness and depth that, nearly 50 years later, still leave audiences slack-jawed. Satire, absurdist humor, and traditional blues also pepper the album, which rests upon graceful melodies and sparse, poignant patterns.

Viewed as protest songs, love songs, folk songs, or talking blues songs, the material on The Freewheelin’ Bob Dylanremains amongst the most astonishing and imaginative ever committed to tape. It deserves—as much as you deserve—a fidelity that makes as closely intimate as possible the music’s connection with you. You deserve this edition. 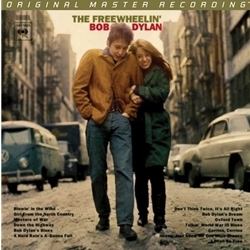 GAIN 2 Ultra Analog™ is a proprietary cutting system built and designed by legendary design genius Tim De Paravicini, with consultation from one of MFSL’s founding fathers – Stan Ricker, an audio engineer responsible for many of MFSL’s most heralded past releases.The GAIN 2 Ultra Analog™ system is comprised of a Studer™ tape machine with customized reproduction electronics* and handcrafted cutting amps that drive an Ortofon cutting head on a restored Neumann VMS-70 lathe. (*It is worth noting that independent studies have confirmed that the GAIN 2 Ultra Analog™ system can unveil sonic information all the way up to 122kHz!)First and foremost, we only utilize first generation original master recordings as source material for our releases. We then play back master tapes at half speed enabling the GAIN 2 Ultra Analog™ system to fully extract the master’s sonic information. Our lacquers are then plated in a specialized process that protects transients in the musical signal. (Due to this process, there may be occasional pops or ticks inherent in initial play back, but as the disc is played more, a high quality stylus will actually polish the grooves and improve the sound). We further ensure optimum sound quality by strictly limiting the number of pressings printed for each release. These limited editions, in addition to being collectors’ items, ensure that the quality of the last pressing matches the quality of the first.As you can imagine, all these efforts involve a tremendous amount of time, technology, cost and effort. The introduction of GAIN 2 Ultra Analog™ maintains Mobile Fidelity Sound Lab’s position as the world’s leading audiophile record label, where a passion for music with extraordinary sound quality matters most. RTI HQ-180 VinylRecord Technology is a world class record pressing plant located in Camarillo, California. We have been operating since 1974, pressing for most audiophile record labels and for many quality minded independent and major record labels from around the world.