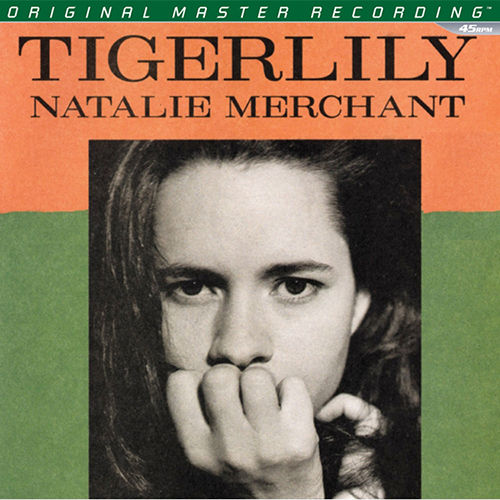 Featured in Michael Fremer's Heavy Rotation in the November 2007 Issue of Stereophile
The 10,000 Maniacs were at their peak when group founder and scintillating vocalist Natalie Merchant announced that she was leaving the band to pursue a solo career. It took her four months to record Tigerlily, a gorgeously detailed folk-pop debut that became a permanent fixture on the album charts for a year after its 1995 release.
The five-times platinum set spawned three giant hits—“Wonder,” “Carnival,” and the haunting “Jealousy”—that simultaneously crossed over to the pop, adult-contemporary, and mainstream singles charts. It’s easy to understand why. On Tigerlily, Merchant turns in a vocal performance for the ages, spinning majestic webs of mellow atmosphere woven with rhythmic textures and low-key movements. This is a mood masterpiece.
Remastered from the original analog tapes, Mobile Fidelity’s collectable version of Tigerlily mines every last nuance and delicate tone from this intimate gem. Merchant’s beautiful voice—her precious coos, soulful inflections, and whisper-soft purrs harken back to the Jazz Era—is presented with an up-close clarity and full-bodied richness that enhance the album’s deeply emotional feel. She uses volume and pitch as a painter utilizes shades on a canvas. Subtle and tender, her phrasing and crescendos underscore the personal nature of the lyrics. Merchant sings about mature topics most songwriters lack the courage to explore, probing the painful loss of a longtime partner on “Beloved Wife,” actor River Phoenix’s tragic death on “River,” and life-altering myths on “San Andreas Fault.”
The vocalist’s bracing conviction is matched by small-scale acoustic frameworks that don’t let a note go to waste. And Mobile Fidelity’s engineers worked to make sure you hear all of them. Aligned on a wide soundstage, the discerning mix of Hammond organs, pianos, chamber percussion, and bluesy guitars come across with their understated intentions intact. Balances are superb, dynamics are grand. There is no better way to experience and enjoy the rich sonic fabrics on this album. The results will leave you hypnotized.

True to its title, Tigerlily balances fierceness and delicacy, creating a rare span of emotional territory.

Listening to Tigerlily, a distinct songwriter's voice emerges, one which possesses strength and vulnerability. The lyrics are personal, the arrangements stark and sparse.

All in all a pleasant, very beautiful voice, lyrics to savor, and some magic. Originally released in 1995, Tigerlily still sounds as fresh as it did then. Natalie froze time and space in this her first solo album following her break from 10,000 Maniacs.

Tigerlily was engineered by John Holbrook, who has worked with The Band, Peter Tosh, and the Isley Brothers. 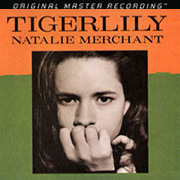