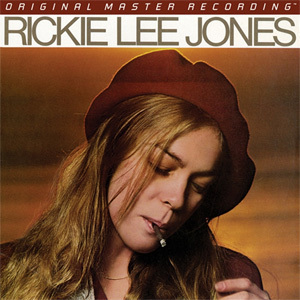 When Jones released her album in 1979 it immediately became an audiophile favourite, and the reason there are so many versions is that RLJ is the ultimate demonstration disc. This 45-RPM box leads the pack. As good as the Kevin Gray and single disc Mobile Fidelity versions are (and they are very good) the box set pulls out all the stops.Sound 10/10 Dennis Davis HI-FI +

No substitute for sheer groove volume, this copy really swings, with significantly more drive and a more expansive soundstage, to boot. Yes, this is analog done to perfection." —Jeff Dorgay, TONEAudio
“It is sexy, jazzy, cool, and…worthy of its demo reputation.”—Ken Kessler, Hi-Fi News,
The newer, 45t from Mobile Fidelity features a wider soundstage. And the texture is off the charts. Listen to the vocal sibilants and you can hear Jones’ breath slowly fade away. The richness added by the 45RPM treatment Sound 5/5 Vintylreviews

Rickie Lee Jones’ Hip, Jazzy Debut as Fresh Today As It Was in 1979 Mastered from the Original Master Tapes and Stretched Out Across 45RPM Grooves:

Wearing a beret, exuding supreme cool, and visually demarcating herself as a member of a bohemian underground, her image on the cover of her self-titled debut says as much about the singer-songwriter as it does the music within the grooves. Uninterested in coloring within the lines, Jones steps out, a dreamer in the post-punk age, an adventurous drifter seemingly deaf to the noisiness of her era. No wonder the work remains one of the most impressive opening salvos in history.

Mastered from the original master tapes, Mobile Fidelity’s 180g 45RPM 2LP edition of Jones’ double-platinum 1979 smash finally gives listeners the ultimate version of this long-adored masterpiece. Always prized by audiophiles for its sonics, the record now breathes with a clearer air, with enhancements in dynamics, imaging, soundstaging, and frequency extension apparent seconds after the needle touches down on the opening grooves. Jones’ singular, jazzy vocals—straddling territory between youthful surprise, street-smart sharp, and grown-up seriousness—take on stupendously lifelike qualities to the extent you can hear into her lungs. The slower speed enriches all of the information contained within the grooves.

Emerging from a quiet Los Angeles scene that also laid claim to Tom Waits, a former love interest, Jones reflects an undiminished capacity for fusing folk, R&B, pop, jazz, and scatted word poetry on an effort that matches the flexibility and elasticity of the artist’s creative approach. As if playing games of hide and seek, Jones often dances around conventional syllabic phrases, using her delivery to stretch language and vowels, turning in diction that’s at once gorgeous and enterprising. She taps into a subtlety of texture and ambience well beyond her then 23-year-old age, inserting sly humor when apt, and never shying away from raw emotion. Renowned for the Top 10 hit “Chuck E’s In Love,” Rickie Lee Jones overflows with finger-snapping be-bop accents, funky cabaret melodies, bluesy bridges, soothing balladry, and even Westernized fills. Subdued complexities flavor the arrangements, expressly tailored for Jones’ portrait-rich storytelling and character-driven narratives. Such diversity is on display on the metaphorical heartache of “Last Chance Texaco,” reflective “Company,” and corner-hangout musings of “Danny’s All-Star Joint.” Throughout, intricate guitar lines give listeners further reason to concentrate on the tunes.

This one is simply a must-have.