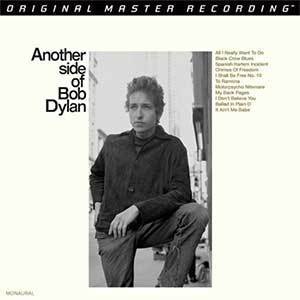 Michael Fremer Rated 10/10 Music, 10/10 Sonics! Analogue Planet "We all know that the legend of Bob Dylan only grows over time. With these releases, we get to own Bob’s work sounding as close to the master tapes as possible. What a treat! "   Dylan’s Second 1964 Album Expands Songwriting Themes and Adds Levity Wider Grooves, Superior Sound: Mobile Fidelity’s 45RPM Edition

The Last Word in Analog Fidelity Recorded in One Day: Whimsical Feel, Surrealist Lyrics, On-the-Fly Fluidness Grace the Bard’s Loosest 1960s Effort Includes “I Shall Be Free No. 10,” “It Ain’t Me Babe,” “My Back Pages,” “Chimes of Freedom”

As part of its Bob Dylan catalog restoration series, Mobile Fidelity is thoroughly humbled to have the privilege of mastering the iconic LP from the original master tapes and pressing it on 45RPM LPs at RTI. The end result is the very finest, most transparent analog stereo edition of Another Side of Bob Dylan ever produced. Be there as the Minnesota native spends the evening of June 9, 1964 in Columbia’s Studio A and, displaying an openness he’d never before revealed in a formal environment, lays down the songs that compromise his fourth album.