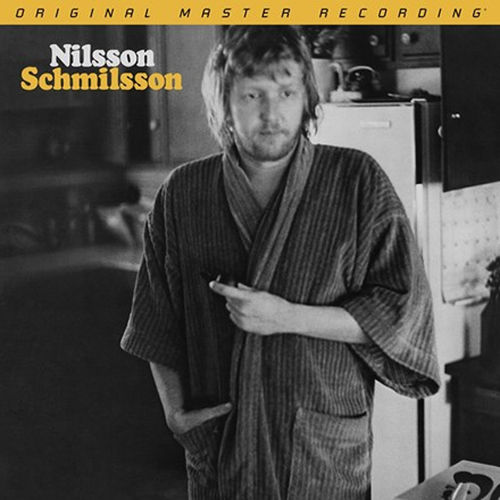 The overly used expression "like hearing this for the first time" is very appropriate here. Compared to my original, the new found level of clarity and rhythmic drive will dazzle your senses. "Jump Into The Fire" is especially engaging, as the drum solo mid song will absolutely knock your socks off. Talk about depth charge like explosions into your listening room, the extreme weight and clarity on the bottom end will test your entire system. Take a trip down memory lane and enjoy! Highly recommended! Postive Feedback

Mastered from the original master tapes and strictly limited Nilsson Schmilsson features unadulterated transparency and visceral solidity. The Brooklyn native's three-and-a-half octave range and beautiful phrasing come across with captivating depth, crystalline purity, and an emotional scope that stretches from tenderness to melodrama to sarcasm and beyond. Appealing as Nilsson's bizarre quirks remain, given how they stamp his music with personality and charm, his tremendous singing – of which Bud Scoppa memorably wrote possessed "a slight sawtooth buzz to add resonance when required" – takes center stage.

Ditto the eclectic arrangements that lend an organic cohesiveness the four-time Grammy-nominated record, named by Pitchfork as one of the Top 100 Albums of the 1970s. Produced by Richard Perry, known for his work with Barbra Streisand, Nilsson Schmilsson walks a tightrope between streamlined accessibility and mischievous, whimsical individualism. Providing a prime example of its architect's breadth, a surfeit of exceptionally played organs, mellotrons, horns, strings, guitars, piano, and more paint daring soundscapes that on this reissue teem with color, texture, and detail. Reference-level spatiality and separation contribute to full, three-dimensional imaging and the ability to identify distinctive instruments (and their tones) in the mix.

None more so than those on "Without You," of course. Nilsson's sublime rendition of the Badfinger song climbed to the top of the Billboard charts and became a staple still heard in films and television shows. A pinwheel of point and counterpoint melody, and ringed by accordions, trumpets, and trombones, the bright, upbeat albeit melancholy "Gotta Get Up" also has enjoyed new life via its prominent appearance in the Netflix series "Russian Doll."

More famous still is the indelible "Coconut," a Caribbean-flavored novelty smash that zoomed into the Billboard Top 10 and witnesses not only Nilsson's savvy lyrical acumen but finds him singing in a variety of different voices to suit the characters. Indeed, character abounds on Nilsson Schmilsson, one whose genius gets spotlit in solo form on the spooky, shivering, sleepless-at-2AM blues "Early in the Morning" with the same effortlessness it handles the raucousness of the romping, groove-laden "Jump into the Fire." (Just listen to those bass strings growl!)

"We can make each other happy," Nilsson shouts. No argument here. Secure your collectible copy of this inimitable album

.
GAIN 2 Ultra Analog™ is a proprietary cutting system built and designed by legendary design genius Tim De Paravicini, with consultation from one of MFSL’s founding fathers – Stan Ricker, an audio engineer responsible for many of MFSL’s most heralded past releases.
The GAIN 2 Ultra Analog™ system is comprised of a Studer™ tape machine with customized reproduction electronics* and handcrafted cutting amps that drive an Ortofon cutting head on a restored Neumann VMS-70 lathe. (*It is worth noting that independent studies have confirmed that the GAIN 2 Ultra Analog™ system can unveil sonic information all the way up to 122kHz!)
First and foremost, we only utilize first generation original master recordings as source material for our releases. We then play back master tapes at half speed enabling the GAIN 2 Ultra Analog™ system to fully extract the master’s sonic information. Our lacquers are then plated in a specialized process that protects transients in the musical signal. (Due to this process, there may be occasional pops or ticks inherent in initial play back, but as the disc is played more, a high quality stylus will actually polish the grooves and improve the sound). We further ensure optimum sound quality by strictly limiting the number of pressings printed for each release. These limited editions, in addition to being collectors’ items, ensure that the quality of the last pressing matches the quality of the first.
As you can imagine, all these efforts involve a tremendous amount of time, technology, cost and effort. The introduction of GAIN 2 Ultra Analog™ maintains Mobile Fidelity Sound Lab’s position as the world’s leading audiophile record label, where a passion for music with extraordinary sound quality matters most.