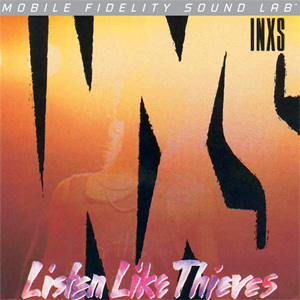 True to the title of the record’s smash single, INXS gives you what you need on Listen Like Thieves. Originally released in 1985, the breakthrough album marked the group’s deserved entrance into the mainstream radio sphere and commercial charts. With its sound honed from prior records, INXS develops an enviably balanced combination of dance grooves, bluesy persuasion, acoustic framing, and pop bluster on this batch of supremely catchy fare, equally memorable for its melodic nature and stylistic fusion.

Working with producer Chris Thomas (John Cale, Pete Townshend, Roxy Music), INXS expands its versatility and reach. Vocalist Michael Hutchence, too, comes into his own, singing more confidently, soulfully, and warmly than in the past. While avoiding cheap imitation, the Aussies turn to the Rolling Stones as influences, churning out thick riffs and slithering rhythms that aim for the hips and stimulate the feet.

Hutchence splits the difference between the sexual bravado of Mick Jagger and primal depth of Jim Morrison, and in doing so, establishes himself as an original who’s always careful not to overdo anything or overstay his welcome. Bolstered by a series of can’t-miss singles—the swaggeringly funky “What You Need,” sharp thrust of “Listen Like Thieves,” and wistful “Kiss the Dirt”—Listen Like Thieves teems with glorious hooks and intertwining instrumentation that cross-pollinates jazz, R&B, new-wave, and pub rock. Honking saxophone lines surge throughout, punctuating the spare chords and driving bridges with an insouciant edge missing from most of the decade’s pop. A knack for atmospheric production also plays a large role.

On “Shine Like It Does,” a majestic moodiness takes hold, while “This Time” gives U2 a run for its money. Mastered on Mobile Fidelity’s world-renowned mastering system and pressed at RTI, Silver Series’ numbered limited edition LP significantly enhances the midband, textural qualities, and ample spaciousness—all previously boxed-in on prior editions. The character of the bass notes, as well as the depth and breathiness of the vocals are also noticeably improved, bringing out the music’s personality and dynamics like never before.