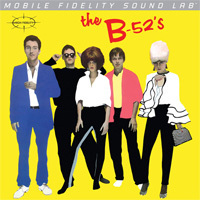 "The B-52s sounds as otherworldly today as it did when it was released over 30 years ago. It's a dizzying, headlong ride without brakes, a melange of dance beats, surf guitar licks, vocals that teeter between news-anchor recitation and near-falsetto warbling, and an array of instruments that includes glockenspiel and toy piano, all filtered through a campy sense of humor. Beginning to end, there is nothing else quite like it... Each instrumental line of this busy music is supremely delineated, and the bass is quick-paced and potent." - Mark Mickelson, theaudiobeat. 4.5/5 Music, 4.5/5 Sound

When compared to an original pressing, the MOFI is an almost shocking improvement. The OG is highly compressed and muddy with very little to offer at both ends of the frequency range. In contrast, the MOFI has an almost endless amount of dynamic contrast and agility. There is a level of attack and punch that makes this music so much more fun and enjoyable. Vocals are nicely separated and instruments are clearly layered across the soundstage and from front to back. An absolute classic from the wild and crazy 1970s! - Positive Feedback

Beehive hairdos, goofy sci-fi humor, lava-lamp kitsch, thrift-store fashions, party-starting tunes, unconventional perspectives, and the unique blending of the underground aesthetic with mainstream accessibility: The B-52’s mix all this and more into a dizzying cocktail on their self-titled debut, which remains one of the most ahead-of-its-time, endlessly enjoyable, and vividly colorful albums ever released.

Ranked at #152 on Rolling Stone’s list of the 500 Greatest Albums of All Time, The B-52’s has its roots in the band’s improbable genesis, itself reflective of the record’s gleeful moods and quirky charms. The five members first played after sharing a tropical alcoholic beverage at a Chinese restaurant, the ironic silliness and spontaneous irreverence indicative of the music on its breakthrough record. Not to mention how it mirrors the unusual hodgepodge of instrumentation: organs, walkie talkies, bongos, glockenspiels, tambourines, toy pianos, smoke alarms, and more!

Musically, the band proves just as adventurous and whimsical. Using pleasant harmonies as a backdrop and Kate Pierson’s squealing organ as a starting point, the B-52’s draw upon surf-rock grooves, beach-bound soul-pop, herky-jerky funk riffs, minimalist rhythms, and Ricky Wilson’s unusual guitar lines to craft songs that tower above the sarcastic suggestiveness and campy declarations. Of course, the latter are plenty entertaining on their own, but there’s no denying the dance-bound persuasiveness and melodic shimmy associated with the classic cult single “Rock Lobster” and splendid cover of the ubiquitous Petula Clark standard “Downtown.” You’ve never heard anything like this.

Indeed, the B-52s were about a decade ahead of the alt-rock revolution when they recorded this delightfully campy, intentionally goofy, lyrically tawdry, and undeniably harmonic 1979 new-wave set that comes off as the best dance party you might ever hear.  This is 40 minutes of nothing but a good time.

Mastered on Mobile Fidelity’s world-renowned mastering system and pressed at RTI (America's best record plant), Silver Label numbered limited edition LP presents the B-52’s brilliant debut in a fidelity it’s never previously enjoyed. So detailed and realistic are the timbres, accents, and harmonies, you’ll think the band’s bright outfits are appearing right in front of you. Plus, the LP is worth the cost alone for the iconic album cover, which spotlights those bouffant ‘dos.

Much as I love the B-52’s, I forgot just how awful this record sounded. And really, there’s excuse for the shortcomings. In 1979, the CD was still years away, but you’d never guess by giving this new wave classic a cursory listen. Compression is king; cymbals are crunchy and the soundstage is flat and two-dimensional. To make matters worse, the group’s signature “Rock Lobster” tune is plagued with inner-groove distortion. Arrgh.
MoFi’s Silver Label version instantly trounces the standard issue pressing. During the opening “Planet Claire,” there’s a great bongo track that is all but lost in the mix on the original. The remaster gives the aforementioned instruments plenty of room to breathe along with the vocal tracks. This pressing has oodles of bass energy; by comparison, the original sounds like a system with the subwoofer off and seems to roll off around 80hz with no weight. (Like all of the early Van Halen albums.)
And “Rock Lobster” now sounds incredible. Vocalists Fred Schneider and Cindy Wilson now have a much more distinct sound, especially when experienced after hearing the original pressing, on which they just blend in to be one, fat vocal track. And all traces of inner-groove distortion are banished on both sides of the LP, a testament to the care put into this pressing.- -Jeff Dorgay Toneaudio
Drums, Percussion – Keith Strickland
Guitar – Ricky Wilson
Producer – Chris Blackwell
Vocals, Bongos, Guitar, Tambourine – Cindy Wilson
Vocals, Organ, Bass  – Kate Pierson
Vocals, Piano  Bass – Fred Schneider
The B-52's The B-52's Track Listing:
1. "Planet Claire"
2. "52 Girls"
3. "Dance This Mess Around"
4. "Rock Lobster"
5. "Lava"
6. "There's a Moon in the Sky (Called the Moon)"
7. "Hero Worship"
8. "6060-842"
9. "Downtown" 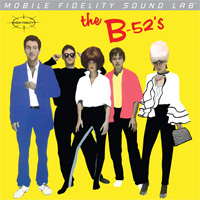 RTI  HQ Vinyl
Record Technology is a world class record pressing plant located in Camarillo, California. We have been operating since 1974, pressing for most audiophile record labels and for many quality minded independent and major record labels from around the world.