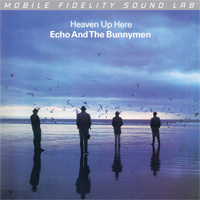 How strong and looming of an influence is Echo and the Bunnymen? Strong enough to be the one band name-dropped in a great piece of dialogue from the music-loving film High Fidelity,whereupon Jack Black’s quipping record store clerk character cites the band as legitimate tastemakers for much of the cutting-edge music that happened in the late 80s and beyond. And on no record is the English quintet’s greatness more apparent than on 1981’s sophomoreHeaven Up Here, the group’s first effort to chart in the U.S. and a Top 10 smash in its native U.K.

Cloudy and jagged for certain, but the majesty of Heaven Up Here relates to how, in spite of the haunted arrangements and claustrophobic feel, ribbons of light and hope illuminate its shadowy corners and nocturnal glow. Sharing much in common with Joy Division’s period output and a precursor to later work by The Jesus and Mary Chain, The Cure, Love and Rockets, Ride, and countless other U.K. artists,Heaven Up Here soars on Will Seargant’s angular six-string blues, McCulloch’s vampiric grayness, and etched, stair-stepping bass movements.

Mastered on Mobile Fidelity’s world-renowned mastering system and pressed at RTI (America’s best record plant), Silver Label numbered limited edition LP presents Echo and the Bunnymen’s breakthrough in an involving fidelity that blows away what’s on the original pressings. Listeners will revel in the opened-up reverb, sound effects, complex tonalities, swimmy textures, and crafty overdubs that are so essential to the music. This is an 80s landmark, and if you like early U2, you need this album.
• Numbered, Limited Edition • 33rpm Speed Edition
• Mastering by Mobile Fidelity Sound Lab • Specially Plated and Pressed on 140 grams of High Definition Vinyl
• Special Static Free - Dust Free Inner Sleeve • Heavy Duty Protective Packaging
• Mastered from the Original Master Tapes • Pressed at RTI

Echo and the Bunnymen Heaven Up Here Track Listing: 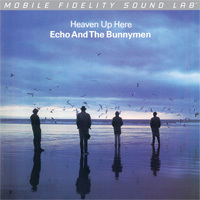