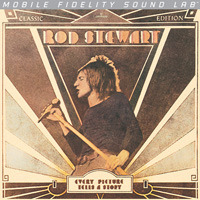 Rod Stewart owned the early 1970s. When he wasn’t recording great sets with the Faces, he was redefining how folk, country, and soul music could be folded under rock’s umbrella. Filled with first-rate originals and terrific interpretations of classics, Every Picture Tells A Story remains Stewart’s watershed moment, a brilliant synthesis of organic warmth, earthy tones, raucous romance, and loose performances. Those who only know Stewart from his later evolution into a sappy balladeer will be overwhelmed.

Mastered on Mobile Fidelity’s world-renowned mastering system and pressed at RTI (the best record plant in America), MoFi Silver Labels’ numbered limited edition LP presents the 1971 smash in the most transparent, warm, and full-range sound the music has ever enjoyed. Stewart’s supremely soulful vocals come on with insouciant passion and joyous persuasion, the detail allowing listeners to hear into his lungs and feel every breath he draws. His equally superb band is presented amidst an expanded soundstage that’s free of artificial ceilings and harshness introduced by several digital remastering editions. The explosive sound is akin to watching a fledgling group come into its own in a small club. Kicking up the tempo and slightly increasing the edge from his previous solo effort, Stewart transforms blues, folk, country, and soul into a hard-rocking hybrid that maintains acoustic properties but isn’t afraid to step out and report on what it’s like to have a night out on the town.

Anchored by Mick Waller’s free-swinging percussion, every song triumphs, with Stewart’s slightly hoarse and eminently emotive vocals communicating each word as if they’re literally sewn as hearts on his sleeve. Ron Wood’s slide guitar and gritty chords complement the singer’s earnest conviction, and Ian McLagan’s organ adds bittersweet accents. Nothing here is blue; Every Picture Tells A Story is a celebration. Stewart combines American and British folk styles on the strolling “Mandolin Wind,” the touching song epitomizing the simple, direct approach that underpins the entire album. On the breathless title track, Stewart embraces his inner playboy, the tune’s likeable crude-and-rude swagger sent up on crackling rhythms and visceral harmonies. The British native handles Bob Dylan’s “Tommorow Is A Long Time” and the evergreen “That’s All Right” as if he wrote them.

The best aspect of Every Picture Tells A Story relates to how genuine and believable Stewart and his good-natured company sound throughout. If you are a fan of rock, soul, folk, or the blues, you owe it to yourself to have a superb copy of this timeless record that shows off its translucent and organic tones, extraordinary vocal performances, and crack backing band. Mobile Fidelity’s Silver Label numbered limited edition LP does just that. And it restores one of the most iconic album covers in history. As for that “Classic Edition” statement that’s always hovered at the top of the record?   Never truer than now. 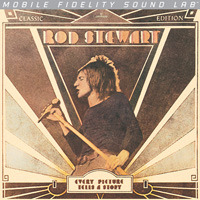