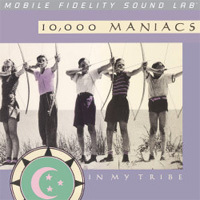 Along with R.E.M. and XTC, 10,000 Maniacs epitomized 1980s "college rock" in terms of sound, style, expression, and attitude. A staple of the underground, independent, and university scenes, In My Tribe remains a landmark recording, an ideal synthesis of fundamental eclecticism, roots music, and personalized narratives anchored by Natalie Merchant's inimitable singing.

Unlike most of their contemporaries, and in particular, the alt-country acts that followed in their wake, 10,000 Maniacs were truly a product of their environment - a small-town Appalachian setting that informs their songwriting, approaches, and arrangements. In reflecting on the band's ascendance, Merchant described the group's essence as such:  "We called the music we made 'proletariat,' aware of the fact that we were blue-collar small-town dwellers, geographically and culturally isolated. We were beginning to feel the country's shift to the right at the threshold of the Reagan-Bush era. We had a growing understanding that the recession of post-industrial towns like ours might not be temporary and we were coming of age in an atmosphere of nostalgia and decay." - Natalie Merchant, liner notes to Campfire Songs: The Popular, Obscure & Unknown Recordings of 10,000 Maniacs  Seemingly coming from a different landscape, nothing about the 10,000 Maniacs' fare is typical — for its era or now. There's a genuine nature to the material on In My Tribe that directly relates to time and place, personal emotion and devout introspection. Probing issues of child abuse ("What's the Matter Here"), alcoholism ("Don't Talk"), illiteracy ("Cherry Tree"), and the environment ("Campfire Song"), the ensemble ushered in a period of artistic political correctness and high creativity during an era short on both.  Refraining from preaching and focused on pure rhythms, catchy melodies, and inoffensive rock structures, the band channels an inherent folk goodness that's forever tethered to Merchant's mellifluous vocals and heartfelt cadences. Veteran arranger David Campbell (Beck's father) organizes the strings, and producer Peter Asher (Linda Ronstadt) smooths over the edges just enough to give In My Tribe the ideal sound. R.E.M. frontman Michael Stipe lands a welcome hand.  Mastered on Mobile Fidelity's world-renowned mastering system and pressed at RTI, Silver Label's collectable version of this 1987 masterwork captures the delicate nuances of Merchant's voice as well as the full scope of the strings with amazing detail and clarity. No existing 10,000 Maniacs record, digital or analog, claims such revealing sonics or expansive imaging. Whether you're a longtime fan or new to the album, you'll be blown away the organic presence and balanced soundstage. Not to mention the indelible music.  Special Note: In 1989, when Muslim convert Stevens announced his support of Iranian leader Ayatollah Khomeini's call for the execution of Satanic Verses author Salman Rushdie, the band rereleased the album without the track "Peace Train." Thus, this reissue does not include this song per the band's exclusion of the title.  Features: • Limited Edition • Numbered • MoFi Silver Label Vinyl Series • Mastered and Cut on the famous MoFi Sound Lab state-of-the-art Tim de Paravacini-designed mastering system. • Pressed at RTI on Audiophile-Grade Standard Vinyl 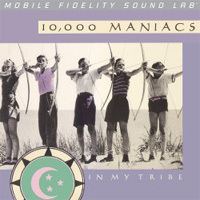