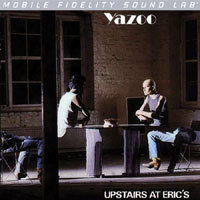 Fans can rejoice anew...Most importantly, we tip our hats to Mobile Fidelity for continuing to release fun records. If this era was part of the soundtrack of your life, this one’s a must.  -Jeff Dorgay Toneaudio

Original vinyl copies of Upstairs at Eric’s are available for slightly less than you’d pay for this new pressing, but the improved sound and hardly noticeable price difference make this MoFi release the vinyl edition to get.- The Audio Beat

This just happens to be my favorite Artist and Album ever. I have listened to this music ever since its original release. Easily 1000 times. I have 4 different releases of this on CD - imports and domestic. I have probably owned 6 or 7 copies of this vinyl LP. Nothing comes even close to depth, detail, crispness, intimacy and clarity off this recording. One of my "all digital" friends asked if he was listening to one of my new SACDs. I pointed to the turntable and all he said was, "Wow". I firmly agree. - LPReview

An 80s Landmark: Ex-Depeche Mode Member Vince Clarke and Vocalist Alison Moyet Create Synthpop Classic The 1980s will forever be remembered for electropop sensations, yet few, if any, are quite as sensational as Yazoo’s Upstairs at Eric’s. A standard-setting mélange of smoky blues singing, jazzy arrangements, disco-tinged beats, and dancefloor vibes, the smash debut fits equally as well at a late-night club as it does in a living room, where the record’s complexity and exoticism takes listeners hostage. No wonder the 1982 landmark remains one of the decade’s most essential albums.

This numbered limited edition Silver Label LP breathes with a decongested openness, textural richness, and tonal palette never before experienced on previous analog or digital editions. Alison Moyet’s inimitable vocals, such a huge part of the record’s appeal, are dramatically enhanced, her sensual timbre, bittersweet crooning, and knockout range now encompassing the full frequency spectrum and projecting outward in a way that traverses the flatness of the original pressings.

Indeed, her bluesy deliveries are at once elegant and exuberant, and give collaborative partner Vince Clarke free range to construct beat architectures that encompass freewheeling disco, house music, uptempo dance, and chilled-out pop. The former Depeche Mode member also layers on elegant keyboard melodies, establishing contagious hooks and electronic-laced landscapes that preceded the techno explosion and do so with a cooler elegance. Tape loops, random field-noise dialogues, and synth-stroked bass notes add to what’s nothing less than a perfect collusion of moody paranoia and soulful warmth. While a cousin to synth-pop LPs by the likes of the Eurythmics, Soft Cell, OMD, and Depeche Mode, Yazoo’s Upstairs at Eric’s is singular for its chemistry between Moyet and Clarke—and an insouciant batch of songs high on emotion, style, and substance.

It was tough to turn on MTV in the fall of 1982 for more than 20 minutes and not see the video for Yaz’s “Don’t Go.” The shoulder pads were big, with big hair to match, and Brit synth-pop ruled the airwaves. Yaz members Alison Moyet and Vince Clarke would go their separate ways a year later, but they were two of the major architects of a sound that would influence many others.
Guilty pleasures confessed, an original copy of this record still lurks in my record collection, and the Mobile Fidelity reissue is superior in every way.  First released on Mute Records, the original is downright harsh and trebly.  What would you expect from a bunch of keyboards and drum machines?
The MoFi crew does an excellent job at giving this dancefloor classic a bit of air and extension, as well an actual soundstage, spread across the speakers with much more substantial bass energy that matches the dynamics of the group’s 45RPM maxi-singles. (yeah, guilty again). These characteristics are particularly evident on “I Before E, Except After C,” on which Moyet’s bubbly giggling fills the room with presence. It’s anemic on the original pressing.
Most importantly, we tip our hats to Mobile Fidelity for continuing to release fun records. If this era was part of the soundtrack of your life, this one’s a must.  -Jeff Dorgay Toneaudio 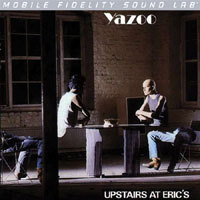