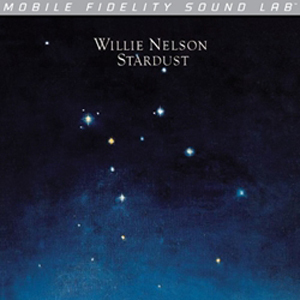 Wow! I have a copy of the original Columbia in pristine condition and it sounds great, but this new issue blows it away, you can hear everything clear and in front of you This is my favorite Willie album and this MoFi issue is superb. - 5/5 LPreview

Talk about outlaw country. Cutting against the genre’s traditions and Music Row conventions, Nelson’s Stardust remains a genius-level creation as well as the icon’s most commercially successful release, a truly gorgeous record infused with ultimate respect for composers and lyrics and many of the finest performances of his career. It is a quintessential part of any catalog.

Mastered on our world-renowned mastering system and pressed at RTI, this Silver Label LP dazzles with dead-quiet surfaces, tube-like warmth, and an enhanced soundstage. Further exposing the delicate touches abounding in Stax legend Booker T. Jones’ production, this edition brings out the textured kernels of Nelson’s voice—and the deep-seeded dignity, austerity, devotion, grit, sensitivity, grace, and plaintiveness within it. His brilliant phrasing throughout is on par with that of Frank Sinatra and Ray Charles, two giants that influenced this project and his willingness to pair with strings and small combo to wondrous effect. Having met Jones while living in Malibu, Nelson established a relationship with the musician that extended to roles as producer, arranger and band mate. Jones’ superior knowledge of the American Songbook comes through via the material’s economy of scale and sympathetic approach.

Acoustic guitar arpeggios, contrasting breaks, bluesy harmonicas, glowing organs, R&B-tinged horns, brushed drums, and relaxed bass lines trickle throughout the songs, all distinguished by Nelson’s intimate timbre and absolutely astonishing vocal expressiveness. In redefining and reimagining standards such as Irving Berlin’s “Blue Skies,” Hoagy Carmichael’s “Georgia On My Mind,” and the age-old “All of Me”—all of which landed in the Top 5 of the Country singles chart—Nelson wedded together pop, country, jazz, folk, and blues in a manner in which no artist had ever before done. He gained considerable rewards for his exquisite efforts:

Stardust sold more than five million copies and, incredibly, stayed on the Country album charts for more than ten years.

2. Georgia On My Mind

7. On the Sunny Side of the Street

9. Don’t Get Around Much Anymore

10. Someone to Watch Over Me 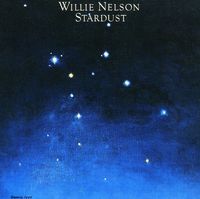 GAIN 2 Ultra Analog™ is a proprietary cutting system built and designed by legendary design genius Tim De Paravicini, with consultation from one of MFSL’s founding fathers – Stan Ricker, an audio engineer responsible for many of MFSL’s most heralded past releases.
The GAIN 2 Ultra Analog™ system is comprised of a Studer™ tape machine with customized reproduction electronics* and handcrafted cutting amps that drive an Ortofon cutting head on a restored Neumann VMS-70 lathe. (*It is worth noting that independent studies have confirmed that the GAIN 2 Ultra Analog™ system can unveil sonic information all the way up to 122kHz!)
First and foremost, we only utilize first generation original master recordings as source material for our releases. We then play back master tapes at half speed enabling the GAIN 2 Ultra Analog™ system to fully extract the master’s sonic information. Our lacquers are then plated in a specialized process that protects transients in the musical signal. (Due to this process, there may be occasional pops or ticks inherent in initial play back, but as the disc is played more, a high quality stylus will actually polish the grooves and improve the sound). We further ensure optimum sound quality by strictly limiting the number of pressings printed for each release. These limited editions, in addition to being collectors’ items, ensure that the quality of the last pressing matches the quality of the first.
As you can imagine, all these efforts involve a tremendous amount of time, technology, cost and effort. The introduction of GAIN 2 Ultra Analog™ maintains Mobile Fidelity Sound Lab’s position as the world’s leading audiophile record label, where a passion for music with extraordinary sound quality matters most.
Record Technology is a world class record pressing plant located in Camarillo, California. We have been operating since 1974, pressing for most audiophile record labels and for many quality minded independent and major record labels from around the world.