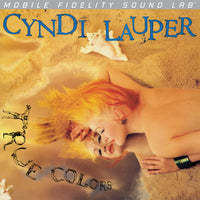 Cyndi Lauper could’ve easily played up the independent wild-child pop persona she established on her breakthrough debut until the trend faded. Instead, on her superb sophomore effort, the charismatic artist opts for a more mature and creatively ambitious program, inviting big-name guests and pursuing deeper instrumental textures on a set that goes far beyond the well-known title track. True Colors is a vocal tour de force, an expressive statement on which Lauper showcases singing steeped in emotion, phrasing, and earnestness.

Bringing Lauper’s rich timbre to the fore, and mastered on Mobile Fidelity’s world-renowned mastering system, this RTI-pressed LP presents the 1986 album in the finest fidelity it’s ever enjoyed. Period touches such as synthesized drumbeats and layered keyboards no longer sound blatantly artificial or canned. Instruments now possess a warmer, fuller roundness that fleshes out their role in the compositions. And Lauper’s vocals—at times balladic, soaring, plaintive, stylish, and celebratory—occupy a defined place in the mix, anchoring songs etched with tonal expressiveness and diverse arrangements.

An all-star cast aids Lauper in shaping what remains a colossally underrated record. Billy Joel (vocals), Adrian Belew (guitar), the Bangles (vocals), Aimee Mann (vocals), Nile Rodgers (guitar), and Rick Derringer (guitar) are among the guests. So is Pee Wee Herman, whose telephone operator role at the conclusion of “911” speaks to the fact that Lauper didn’t abandon her whimsical nature even as she pressed forward. Cajun accents, soulful motifs (“What’s Going On”), and joyous covers of traditional fare (“Iko Iko”) keep the album pleasantly varied and accessibly offbeat.

Of course, Lauper also turns in, with “True Colors,” what’s arguably her career-defining moment, the chart-topping single radiating with gorgeous elegance and graceful phrasing that forced audiences to regard the performer in a different light. For her boldness, Lauper was rewarded with two Grammy nominations and a song that has since been covered by artists such as Phil Collins and appeared as the theme for the 1988 Olympic Games and 2003 Rugby World Cup.

Don’t miss this chance to hear True Colors in the three-dimensional detail one gets from a high-definition television picture. 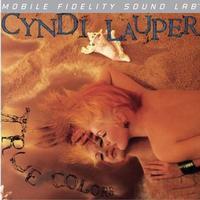