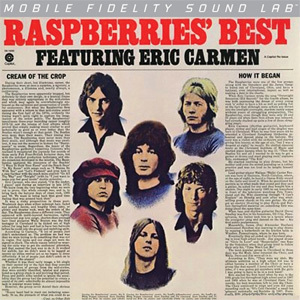 Vocalist Eric Carmen and Co. Deliver One Punchy Chord and Contagious Melody After Another Britpop, Psychedelia, Pop, and Arena Rock Blends Drive Hits Such as “Go All the Way” and “I Wanna Be With You” Mellifluously Airy Harmonies: LP Mastered on Mobile Fidelity’s World-Renowned Mastering System and Pressed at RTI

The matching Mod suits, trim haircuts, and youthful appearance weren’t just for play. The Raspberries’ looks extended to their irresistibly catchy and refreshingly concise music, a blend of bouncy Britpop, lazy-day psychedelia, mellifluous pop, and crunch arena rock that stands apart from the epic pomposity of most of the early 1970s’ commercial trends and continues to linger as some of the most expertly crafted sounds ever created. Over the course of four albums, the singles-minded group cut their share of memorable sides. They’re all here on this 1976 compilation. And now, they possess a fidelity that even the original LPs lacked. Mastered on Mobile Fidelity’s internationally renowned mastering system and pressed at RTI, this Silver Label LP extracts more information from the grooves, extending the spaces between instruments and breathing newfound life into the swirling vocal harmonies. The group’s trademark singing is airier, the highs free of constraints, and the string-laden accents enriched with natural decay. Improved, too, are the quartet’s amplifier-driven chords and frisky drumming, aspects that possess a palpable crunch typical of British Invasion acts.  Adept at both gorgeous devotional ballads and upbeat, fist-pumping rockers, the Raspberries claim a multifaceted talent in leader Eric Carmen, a crooner whose capacity to turn on a dime from a sweet falsetto to searing cry infuses the band’s tunes with emotional exuberance and bittersweet weight. He lends sentimental grace to epic piano weepers such as “Don’t Want to Say Goodbye” and amiable snarl to carefree numbers like “I Wanna Be With You.” However, the Raspberries’ greatest asset relates to their harmonic prowess.

Multi-part group vocals on bounding, surf-referencing fare (“Drivin’ Around”) and catchy, summery material (“Tonight”) recall both the Beach Boys and Beatles. Yet the Raspberries bring a unique edge and R&B-etched rhythm to tunes that stand as proto power-pop  Thematically, the ensemble keeps lyrics as simple and memorable as its hooks, with a majority of songs speaking to the pleasures of romance and love. Breezy, fun, and indelible, it’s music that never goes out of style. Features: • Limited Edition • Numbered • Gatefold Packaging • MoFi Silver Label Vinyl Series • Mastered and Cut on the famous MoFi Sound Lab state-of-the-art Tim de Paravacini-designed mastering system. • Pressed at RTI on Audiophile-Grade Standard Vinyl Selections: 1. Go All the Way 2. Tonight 3. Ecstasy 4. I Wanna Be With You 5. I Can Remember 6. Overnight Sensation 7. Let's Pretend 8. Drivin' Around 9. Starting Over 10. Don't Want To Say Goodbye