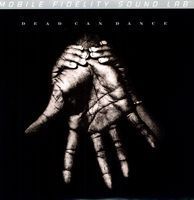 Mastered by Paul Stubbleline from the Original Master Tape at MFSL

If you don't jump out of your seat on occasion as this plays—I don't care how many times you've heard it—something is wrong with your stereo. I've been playing it for seventeen plus years on the original double UK pressed LP set but truthfully haven't listened for awhile as my system has dramatically improved and I had a few adrenaline surges a few times listening to this superb Mobile-Fidelity reissue. -Analogue Planet

It's true enough that lots of groups are doing the mystical World Music thing these days, but Brendan Perry and Lisa Gerard were among the very first, and they still do it as well as anyone. WP has already told you how great the CD sounds; now try the analog version---a beautifully manufactured two-LP set, with dead-quiet surfaces and all the low end they used to roll off on vinyl. Hard to find, but way worth it. www.stereophile.com

Just as Dead Can Dance were utterly distinctive, so too, is the group’s Into the Labyrinth, the scintillating 1993 album that catapulted the Australian duo to greater mainstream success. Widely considered the group’s best work, the album finds members Gerald Perry and Lisa Gerrard moving away from the Renaissance style of their earlier albums and finding new ways of fusing ethnic sounds.

Ethereal, textured, and deeply spiritual, Into the Labyrinth is one of the most gorgeous albums you will ever hear. Anchored by Gerrard’s stunning glossolalia vocals—her language-defying singing on tracks such as “Aridane” meets every definition of speaking in tongues—and Perry’s kaleidoscopic arrangements, the record’s exotic soundscapes mesmerize at every turn. What’s most amazing is that Gerrard and Perry play all of the instruments on the album, which was recorded in the Quivvy Church in Ireland, resulting in optimum sound quality, natural resonance, and lifelike dimensions.

Each song is an exercise in atmosphere, emotion, and beauty. Perry contributes gothic-style vocals to the alternative radio hit and biting “The Ubiquitous Mr. Lovegrove,” an Indian-flavored tune informed by raga drones, orchestral swells, and a gradual pace. Similarly, he channels his key influence—Joy Division’s Ian Curtis—on “The Carnival Is Over,” which balances circus melodies against spry keyboard riffs. A smart commentary on mankind, “How Fortunate the Man with None” is a haunting adaptation of the Berthold Brecht classic that will stick with you for days. In other places, the album comes off as an autumnal film soundtrack replete with Gregorian chants, swirling sounds, and cerebral pop.

Mastered on Mobile Fidelity’s world-renowned mastering system and pressed at RTI (America's best record plant), Silver Labels’ numbered limited edition 2LP set presents Dead Can Dance’s studio masterpiece with awe-inspiring clarity and unprecedented depth. Largely dependent on delicate nuances and containing countless examples of otherworldly textural detail, the music takes on an even deeper meaning and significance that’s on the level of majestic transcendence. Silver Series’ unsurpassed analog version of Into the Labyrinth is one of the reasons you own a hi-fi system.

The spaciousness is astonishing, the clarity and precision of the percussive attack intense, the bass, deep, taut and well-textured and the presentation of Perry's and Gerrard's vocals full bodied and three-dimensional. This is as good as recorded music can sound in my opinion and Mobile Fidelity's reissue on RTI standard weight audiophile quality vinyl presents it against the blackest backdrop. I've played my original to death (pun intended) and it still sounds great and quiet, but this reissue presents an even blacker backdrop. It might be better than the original, but given how many plays mine has had, I'm not sure. It's at least as good, that's for sure.An auspicious start for Mobile Fidelity's new  silver series of LPs. Even if you've never heard this group or this record, if you're going to step out and try something new, this would be the place to do it. Highly, highly recommended for both music and sound. Turn the lights out and you'll be transported to another place. - music 10/10 Sound 11/10 - Michael Fremmer Analogue Planet 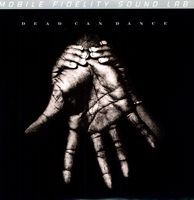