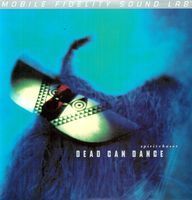 Pure Analogue Mastered by  from the Original Master Tape at MFSL

I have the recently released SACDs of both albums, however, and while they are very good, they pale in comparison to these LPs. There is an abundance of atmosphere that digital, even very good digital, can’t quite capture. Each instrument -- there is an abundance of them -- has true-to-life harmonic complexity, and the vocals are three-dimensional. Oh, and lest I forget, these are double-LP sets, with the music of each album spread over four sides. The extra room allowed the MoFi crew to unearth all of the sonic nuance, instead of squeezing the music onto single LPs. If you’re a Dead Can Dance fan and don’t own the original LPs, these two sets are an essential purchaseThe sonic equivalent of an engaging journey down the Nile River, Spiritchaser is Dead Can Dance’s unforgettable swan song. - theAudiobeat

The percussive-based 1996 set finds the world-fusion group fashioning thematic songs around rhythmic structures and tribal beats, creating atmospheric soundscapes that take the listener through Africa, South America, England, and Europe—sometimes within the same movement. Blurring the lines between styles and genres so that they become irrelevant, Dead Can Dance members Lisa Gerrard and Gerald Perry generate the illusion of being lost amidst a peaceful rain forest that’s yet to be discovered by man.

Spiritchaser is the sound of a lost culture, where ethereal singing, overlapping harmonies, and trance-like tempos serve to calm, relax, and enchant. Gerrard’s phonetic singing—often taking the form of prayer—is grand albeit understated, as much spiritual as it is natural. Just like the music itself. Exotic instrumentation abounds, but nothing seems out of place. A Turkish clarinet, finger cymbals, and a borrowed melody from the Beatles’ “Within You Without You” informs the mystery of tracks such as “Niereka,” which epitomizes Dead Can Dance’s incomparable blend of ancient and modern, alien and familiar, spooky and freeing, serene and intense. Throughout,Spiritchaser strives for a transcendental sense in which music speaks to a higher power and greater purpose than most artists would like to believe—or dare capture. Dead Can Dance’s ambition extended to the production.

Consider what 4AD record label founder Ivo Watts-Russell had to say about the band’s late-period albums and approach to sonics: “They were both extreme perfectionists and it was the ability to record things better, the ability to understand acoustics and the environment, to get things down onto tape in a really top-notch way, that probably influenced the sound and direction of their records as much as what they were thinking about musically.”
Watts-Russell’s observations can be experienced first-hand like never before on Silver Series' numbered limited-edition 2LP set. Mastered on Mobile Fidelity's world-renowned mastering system and pressed at RTI (America's best pressing plant), this pristine vinyl version presents Dead Can Dance’s farewell statement in stunning detail. Recorded at Quivvy Church in Ireland, Perry’s home studio, every note floats and naturally decays, voices carry, guitars shimmer, and the percussive imaging is focused and constant. You’ve never heard Dead Can Dance sound this good! The intricacies that have been uncovered will pull you in as if you’re in the studio.
• Limited Edition  • Numbered • MoFi Silver Label Vinyl Series • Mastered and Cut on the famous MoFi Sound Lab state-of-the-art Tim de Paravacini-designed mastering system. • Pressed at RTI on Audiophile-Grade Standard Vinyl
All instruments performed by
Brendan Perry & Lisa Gerrard
Dead Can Dance Spiritchaser Track Listing:
1. "Nierika" – 5:44
2. "Song of the Stars" – 10:13
3. "Indus" – 9:23
4. "Song of the Dispossessed" – 4:55
5. "Dedicacé Outò" – 1:14
6. "The Snake and the Moon" – 6:11
7. "Song of the Nile" – 8:00
8. "Devorzhum" – 6:13 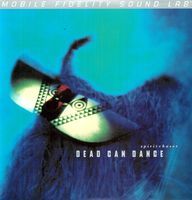