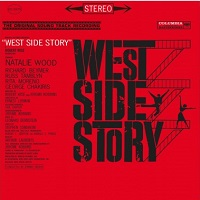 This At The Movies edition contains 4 previously unreleased tracks.

West Side Story is the soundtrack to the 1961 film by the same name. All music is composed by Leonard Bernstein and lyrics written by Stephen Sondheim.

When released, the soundtrack spent 54 weeks at No. 1 on Billboard’s album charts, giving it the longest run at No. 1 of any album in history. In 1962, it won a Grammy award for “Best Sound Track Album - Original Cast” and Johnny Richards orchestrations of the movie score (on Kenton’s West Side Story) also winning a Grammy in 1962 for “Best Large Ensemble Jazz Album” further bolstering the popularity of the movie and soundtrack.

In the United States, it was the best-selling album of the 1960s, certifying three times Platinum in over two decades.

This At The Movies edition contains 4 previously unreleased tracks.