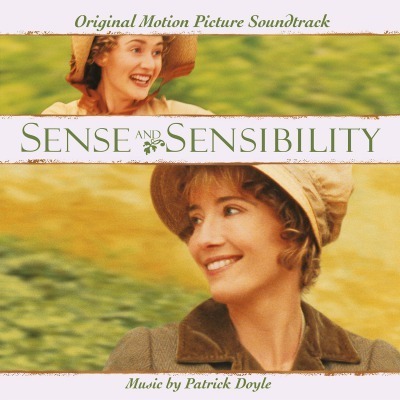 Sense and Sensibility is the original soundtrack of the 1995 film, composed by the Scottish composer Patrick Doyle.

He was a friend of writer and actress Emma Thompson and had worked with her on many previous films. His musical score earned the composer his first nominations for the Academy Award for Best Original Score and the BAFTA Award for Best Film Music. Doyle later described the film as "more stifled; the music had to be suppressed to match what was happening onscreen.

You had this middle-class English motif, and with the music, you would have occasional outbursts of emotion". The score also includes two songs sung by the character of Marianne Dashwood, which Doyle adapted from two poems.

This 25th-anniversary edition is available.

SIDE A
1. WEEP YOU NO MORE SAD FOUNTAINS (FEATURING JANE EAGLEN)
2. A PARTICULAR SUM
3. MY FATHER'S FAVORITE
4. PREYING PENNILESS WOMAN
5. DEVONSHIRE
6. NOT A BEAU FOR MILES
7. ALL THE BETTER FOR HER
8. FELICITY
9. PATIENCE
10. GRANT ME AN INTERVIEW
11. ALL THE DELIGHTS OF THE SEASON
SIDE B
1. STEAM ENGINE
2. WILLOUGHBY
3. MISS GREY
4. EXCELLENT NOTION
5. LEAVING LONDON
6. COMBE MAGNA
7. TO DIE FOR LOVE
8. THERE IS NOTHING LOST
9. THROW THE COINS
10. THE DREAME (FEATURING JANE EAGLEN)
Browse these categories as well: CLASSICAL, ROCK & POPULAR
Contact information
Patrick Doyle - Sense and Sensibility : OST - 180g LP - SCOTT NANGLE AUDIO
T&C's and Privacy Policy