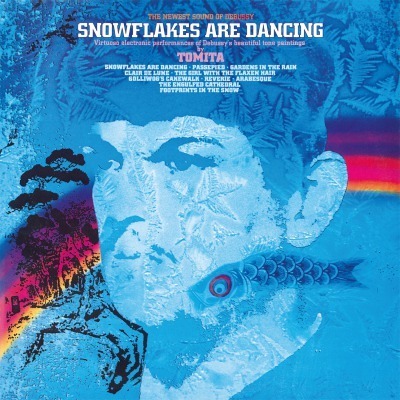 Isao Tomita, also known as Tomita, was a Japanese composer, regarded as one of the pioneers of electronic music and space music, and as one of the most famous producers of analog synthesizer arrangements.

Many of his albums are electronic versions and adaptations of famous classical music pieces. In 1974 Tomita released his second studio album, Snowflakes Are Dancing. The album consisted entirely of Tomita's arrangements of Claude Debussy's “tone paintings”, performed on a Moog synthesizer and a Mellotron.

The track “Clair De Lune” was used at the 2020 Summer Olympics closing ceremony in Tokyo. The album became a worldwide success and was responsible for popularizing several aspects of synthesizer programming. In addition, it entered the US Top 50 charts, became NARM's best-selling classical album of 1975 and was nominated for four Grammy Awards, including Best Classical Album.

Snowflakes Are Dancing is available as a limited edition

SIDE A
1. SNOWFLAKES ARE DANCING
2. REVERIE
3. GARDENS IN THE RAIN
4. CLAIR DE LUNE
5. ARABESQUE NO. 1
SIDE B
1. THE ENGULFED CATHEDRAL
2. PASSEPIED
3. THE GIRL WITH THE FLAXEN HAIR
4. GOLLIWOG'S CAKEWALK
5. FOOTPRINTS IN THE SNOW
Browse these categories as well: CLASSICAL, ELECTRONICA
Contact information
Isao Tomita - Snowflakes Are Dancing - 180g LP - SCOTT NANGLE AUDIO
T&C's and Privacy Policy