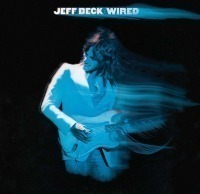 Released in 1976, Jeff Beck's Wired contains some of the best jazz-rock fusion of the period.
Wired is generally more muscular, albeit less-unique than its predecessor, Blow By Blow.
Joining keyboardist Max Middleton, drummer Richard Bailey and producer George Martin from the Blow By Blow sessions are drummer Narada Michael Walden, bassist Wilbur Bascomb and keyboardist Jan Hammer.
Some tracks include members of the Blow by Blow lineup. These tracks were recorded during the Blow by Blow sessions but were left off that album and carried over to Wired. One of the most highly praised tracks is Beck's interpretation of the Charles Mingus classic "Goodbye Pork Pie Hat".Produced by George Martin.
1.   Play With Me
2.   Head For Backstage Pass
3.   Goodbye Pork Pie Hat
4.   Blue Wind
5.   Sophie
6.   Love Is Green
7.   Led Boots
8.   Come Dancing