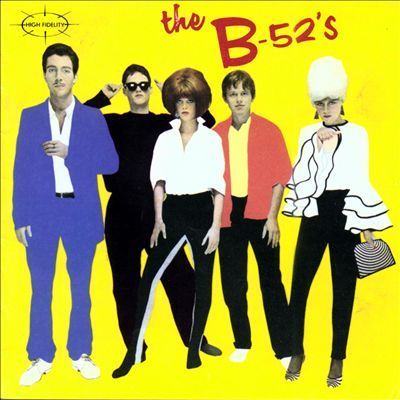 The B-52's is the debut album by the Athens, Georgia-based new wave band The B-52's. The band went on to release several chart-topping singles. The album cover was designed by Tony Wright. Produced by Chris Blackwell, The B-52's peaked at number 59 on the Billboard 200, and "Rock Lobster" reached number 56 on the Hot 100.

The jerky, angular Funk was danceable. It's all great fun. Songs as "Planet Claire", "Dance This Mess Around", and "Rock Lobster" are great songs. These songs illustrated that The B-52's adoration of camp culture wasn't simply affectation, it was a world view capable of turning out brilliant Pop singles and, in turn, influencing mainstream Pop culture.   Even in the weird, quirky world of new wave and post-punk in the late '70s, the B-52's' eponymous debut stood out as an original. Unabashed kitsch mavens at a time when their peers were either vulgar or stylish, the Athens quintet celebrated all the silliest aspects of pre-Beatles pop culture -- bad hairdos, sci-fi nightmares, dance crazes, pastels, and anything else that sprung into their minds -- to a skewed fusion of pop, surf, avant-garde, amateurish punk, and white funk. On paper, it sounds like a cerebral exercise, but it played like a party.
The jerky, angular funk was irresistibly danceable, winning over listeners dubious of Kate Pierson and Cindy Wilson's high-pitched, shrill close harmonies and Fred Schneider's campy, flamboyant vocalizing, pitched halfway between singing and speaking. It's all great fun, but it wouldn't have resonated throughout the years if the group hadn't written such incredibly infectious, memorable tunes as "Planet Claire," "Dance This Mess Around," and, of course, their signature tune, "Rock Lobster."
SIDE A
1. PLANET CLAIRE
2. 52 GIRLS
3. DANCE THIS MESS AROUND
4. ROCK LOBSTER
SIDE B
1. LAVA
2. THERE'S A MOON IN THE SKY (CALLED THE MOON)
3. HERO WORSHIP
4. 6060-842
5. DOWNTOWN
Browse these categories as well: ELECTRONICA, ROCK & POPULAR
Contact information
The B-52`s - The B52`s - 180g LP - SCOTT NANGLE AUDIO
T&C's and Privacy Policy