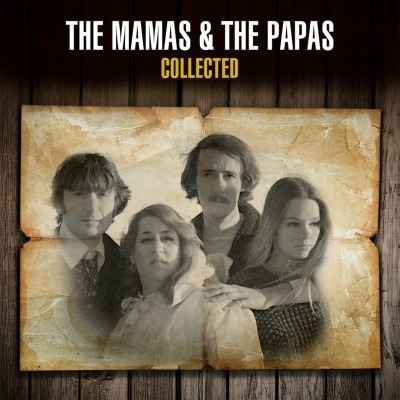 The Mamas & The Papas were formed by husband and wife John and Michelle Phillips, formerly of The New Journeymen, and Denny Doherty, formerly of The Mugwumps. The last member to join was Cass Elliot, Doherty's bandmate in The Mugwumps. The group considered calling itself The Magic Cyrcle before switching to The Mamas and the Papas as apparently inspired by the Hells Angels, whose female associates were called "mamas".

They released a total of five studio albums and seventeen singles over a four-year period, six of which made the Billboard top ten, and sold close to 40 million records worldwide. The band was inducted into the Rock and Roll Hall of Fame in 1998 for their contributions to the music industry.

In 1966 they recorded their second album The Mamas And The Papas. "I Saw Her Again" was the first single from the album before release. When the album was released in 1966, it peaked at number four in the US, continuing the band's success. "Words of Love" was released as the second single and "Dancing in the Street" was released as the third and final single.

Deliver came in the autumn of 1966. The album featured the singles "Look Through My Window", "Dedicated To The One I Love" and "Creeque Alley". Shortly afterward, a non-album single called "Glad to be Unhappy" was released.

Mama Cass Elliot had a successful solo career becoming popular with hits such as "Make Your Own Kind of Music" and "It's Getting Better".

COLLECTED is a perfect overview of the multiple classic hits and tracks throughout the career of The Mamas & The Papas and complimented with several popular tracks by Mama Cass Elliot.

SIDE A
1. CALIFORNIA DREAMIN'
2. MONDAY, MONDAY
3. GO WHERE YOU WANNA GO
4. SOMEBODY GROOVY
5. GOT A FEELIN'
6. STRAIGHT SHOOTER
7. DO YOU WANNA DANCE
8. YOU BABY
9. I SAW HER AGAIN LAST NIGHT
SIDE B
1. EVEN IF I COULD
2. WORDS OF LOVE
3. DANCING IN THE STREET
4. STRANGE YOUNG GIRLS
5. NO SALT ON HER TAIL
6. TRIP, STUMBLE & FALL
7. CREEQUE ALLEY
8. DEDICATED TO THE ONE LOVE
SIDE C
1. LOOK THROUGH MY WINDOW
2. SING FOR YOUR SUPPER
3. MY GIRL
4. GLAD TO BE UNHAPPY
5. DREAM A LITTLE DREAM OF ME
6. SAFE IN MY GARDEN
7. TOO LATE
8. TWELVE THIRTY (YOUNG GIRLS ARE COMING TO THE CANYON)
SIDE D
1. ROOMS
2. MIDNIGHT VOYAGE
3. FOR THE LOVE OF IVY
4. STEP OUT
5. PEARL
6. PEOPLE LIKE US
7. MAMA CASS ELLIOTT - IT'S GETTING BETTER
8. MAMA CASS ELLIOTT - MAKE YOUR OWN KIND OF MUSIC
9. MAMA CASS ELLIOTT - WELCOME TO THE WORLD
Browse this category: ROCK & POPULAR
Contact information
Mamas and The Papas - Collected - 180g 2LP - SCOTT NANGLE AUDIO
T&C's and Privacy Policy