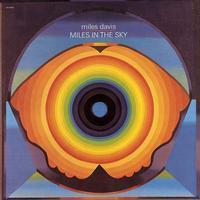 Miles Davis' often overlooked masterpiece Miles in the Sky is his venture into the jazz-rock, which later became known as fusion. While working together with his second great quintet his interest in the usage of electric instruments was increasing every day.

The first album from his “Electric” period is one big grooving adventure, in which he gets the support of the stellar line-up of Wayne Shorter, Tony Williams, Ron Carter, Herbie Hancock, and George Benson. It's a ground-breaking record from the first notes of “Stuff” to the atmospheric final tunes from “Country Son". This turning point in Miles' career must be heard by Jazz fans, especially any admirer of Miles Davis.

SIDE A
1. STUFF
2. PARAPHERNALIA
SIDE B
1. BLACK COMEDY
2. COUNTRY SON