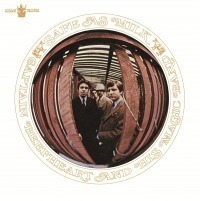 180 grams audiophile vinyl / Insert / Contains 7 bonus tracks (LP2)
Beefheart's debut album, originally released in 1967, was the most accessible and pop inflected of all the releases from his catalogue. Still 'Safe As Milk' is a very strong and heavily blues-influenced work but it also hints on many of the features that would later become the trademarks of Captain Beefheart. Not only did a 20-year old Ry Cooder play bass and guitar on 'Abba Zaba' and 'Grown So Ugly', he also arranged the latter as well as 'Sure 'Nuff 'N Yes I Do'.
Also, Cooder's role in the recording process was 'to translate the Captain's wilder notions to the rest of the band and generally acts as musical director'. With him as a supervisor the sessions proceeded more or less smoothly and 'Safe As Milk' was recorded within a month.
Side 1
1. Sure 'Nuff 'N Yes I Do
2. Zig Zag Wanderer
3. Call On Me
4. Dropout Boogie
5. I'm Glad
6. Electricity
Side 2
1. Yellow Brick Road
2. Abba Zaba
3. Plastic Factory
4. Where There's Woman
5. Grown So Ugly
6. Autumn's Child
Side 3
1. Safe As Milk (Take 5)
2. On Tomorrow
3. Big Black Baby Shoes
4. Flower Pot
Side 4
1. Dirty Blue Gene
2. Trust Us (Take 9)
3. Korn Ring Finger
Browse this category: ROCK & POPULAR
Contact information
Captain Beefheart - Safe As Milk - 180g 2LP - SCOTT NANGLE AUDIO
T&C's and Privacy Policy